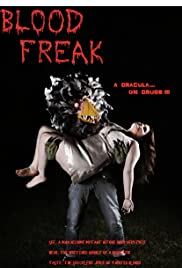 Before I start the review, I need to point out something to you the reader. The directors of this movie, Daniel Boyd and Tim Gross, are very good friends of mine. I write this because I wouldn’t want anyone out there thinking that I was shilling for them. When I review a movie, any movie, I keep things honest and would never try and put over a friend’s project if I didn’t like it. It would be dishonest, and in my experience, people see thru that bullshit anyway. So now onto the review.

Herschel is tooling around Pittsburgh on his motorcycle when he runs into a chick, Angel, whose car has broken down. He gives her a ride back home listening to her Jesus talk along the way. By the time they get to her house he is converted. That annoys Angel’s sister, Ann, so she sets out to win him away from Angel. This includes getting him to smoke some primo weed that immediately gets him hooked. The only way he can support his new weed habit is to submit to the experiments from a pair of scientists that work for the sister’s father at his Light of God Turkey Farm and Science Farm. Before you know it, Herschel is transformed into a hideous Turkey headed monster that gobbles up anyone unfortunate enough to cross his path. Heh, see what I did there?

Just in case you didn’t realize it this is a remake of an early seventies flick also called Blood Freak. It is a legendary, at least among certain bad movie crowds, example of the weirdness that was independent drive-in flicks. It seems like an odd choice to remake, but I totally get it. The original isn’t great so if you are going to remake something then pick a movie you might be able to improve on. Boyd, who also wrote as well as co-directed the movie, does exactly that with one very important choice. He cut out all the nonsense and picked up the pacing of the movie. While the original is only eighty-six minutes long it drags horribly at times. With this remake they have managed to fix that. There isn’t a single scene that lingers too long or is pointless and have trimmed six minutes off the runtime. That is a positive for me as a viewer. 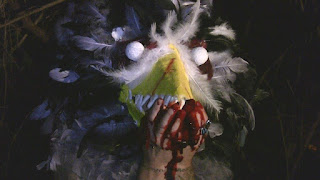 Despite being an independent movie filled with non-professional actors the performances are pretty good. We do get a few spots where some dialogue falls a bit flat, but for the most part its well-executed. This is especially impressive since Boyd doesn’t pull any punches and fills Blood Freak with some witty back and forth banter between his characters. There are some genuinely funny lines that had me laughing. Comedy is hard and I’ve seen enough independent movies attempt and fail to pull this off, so when I see one work I take notice. On a personal note I never thought that my friend Charlie Fleming was so damn funny, but here as Pops he drops some great lines and is awesome.

The design of the Turkey head when Herschel transforms is every bit as silly as I would expect it to be. It looks good but also has just enough cheesiness that it feels right. I mean this is a cautionary tale about smoking “the weed” where our main character turns into a turkey monster. I don’t want to be distracted by nor do I expect some incredible effects work. The creature fits the story and helps to complete the vibe that I think Boyd and Gross were going for.

I was very nervous about watching this movie. As I stated earlier, I’m an honest reviewer and I know that in the past I’ve pissed some people off with my coverage of their movies. Thankfully the guys made a fun and entertaining movie that I can totally get behind and recommend. If you want to check the movie out and support independent filmmaking check out the Blood Freak Facebook page here to find out how to order yourself a copy.

Posted by Gutmunchers Lives at 10:57 AM