I was directed to this movie by my good friend and fellow podcaster Kyle. He mentioned it while we were recording a show and said it was great. I’ve had mixed results listening to his advice, but he was right with this one. 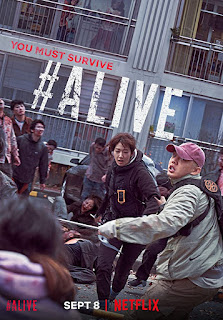 The movie kicks off with a slacker type waking up late hitting the fridge and then logging into his favorite game. While chatting with the other players they start talking about the news. An emergency broadcast is up and is warning everyone to stay in their homes. The slacker, Joon, opens the window and outside the world is in chaos. People are being killed and reanimated while he watches in horror. Joon then hears a noise at the door and a strange man who claims to be his neighbor bursts in. He is agitated and gives some background before they reveal he is infected. He goes full zombie and after tossing him off the balcony we get some talking heads on the television to fill in the blanks. Joon is in the middle of a full-blown zombie apocalypse.

The rest of the story is our lead character dealing with days of isolation, running out of food and water, and eventually giving into despair. The audience watches as he gives up and hangs himself, only to see a laser pointer flashing on his shirt. He gets himself loose and looks across the apartment complex to see a pretty young girl across the way. The pair have to be careful not to draw attention to themselves, so it is slow going at first. But eventually they get radios and are able to communicate. The conversations lead them to decision that they can’t wait around anymore and must make a break for it. The rest of the story is them trying to make their escape. 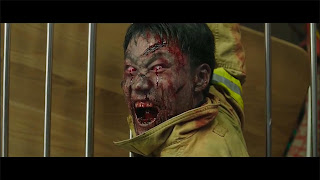 This is an interesting movie. It is a rare entry into the genre that focuses more on the human characters and their isolation as they must hide from the threat outside. We do get some zombies but next to no gore. Instead #Alive builds tension and more than a little bit of despair. There were several times that I was bummed out as the story goes to some dark places. I’ve already mentioned Joon attempted suicide, but there is also a bit with a lady police officer, and another with a grieving husband that are disturbing. The worst though is when a daughter “zombies” out on her mom… that was a kick in the butt. I mean this in a good way as I was so invested in the characters and their struggle to survive that I cared what happened. I only mention this in case you are looking for a silly fun gorefest of a zombie flick. This isn’t that. 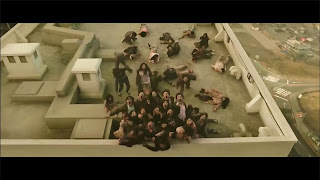 I should backtrack a bit. As I’ve mentioned above this isn’t a gory movie at all. I don’t think we get a single nasty kill on screen. Even the police officer is killed after being drug down a tunnel out of sight. We only know she died when they show you her zombie later on. What the movie lacks in explicit gore it makes up for in creature design. They pay a lot of attention to making at least the featured zombies unique looking. In most cases you can see how they were killed with visible wounds. This movie also went the Train to Busan route with the zombies turning with joint cracking contortions followed up with a lot of gooey drool and blood. While I’m not a huge fan of fast zombies I’ll admit that these are scary.

A few random bits before I give my final recommendation. #Alive has some creative scenes where Joon uses technology like a drone to solve their problems. I also enjoyed that this gamer kid doesn’t become a combat god and start tearing everything up, but instead spends most of the movie running away. That is realistic and a nice touch. I was also very impressed with the creative use of the small setting, television, and social media to give a lot more scale to the outbreak than I would have expected from a lower budget movie. This shows a lot of creativity which is lacking in so many movies I sit thru in the zombie genre.

I really liked #Alive and am going to recommend everyone check it out. This is currently streaming on Netflix, so it is easy to find. Again, I must warn you if you are looking for a gorefest this isn’t the right movie.