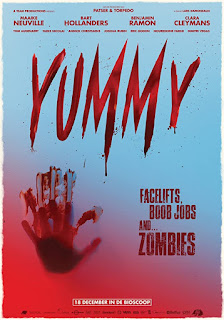 I was browsing around on Shudder and found this Dutch made zombie flick. It takes place at a clinic that does plastic surgery, which is a new setting for some gut munching action. That alone made me want to check this one out.   Alison is on her way to the clinic with her mother, Sylvia, to get some work done. Mom wants a tummy tuck and other age defying procedures while Sylvia wants a breast reduction. This means they have very different reasons for some elective surgery. Driving them is Alison’s boyfriend Michael. They arrive at the clinic, which isn’t as nice as the brochure made it look, and it becomes clear that things are a bit sketchy. Michael knows this because he was premed before finding out he hated the sight of blood. This won’t be important later will it?

Being uncomfortable Michael is taken on a tour of the facility by a junkie orderly and along the way accidentally releases a woman who just so happens to be a zombie. I think we all know what happens next. Get bitten, turn, and spread the love. Things go bad fast and we are eventually left with a small cast of characters trying to escape the hospital that is now filled with the undead. Characters are lost along the way until our cast is whittled down to just a couple. How does it end? Well I’m not going to spoil anything with my review, so I won’t answer that question. Though I might as well point out that I was disappointed and rather annoyed by the ending. It didn’t feel like it fit with the rest of the movie. Again, I can’t say anymore without spoilers. This is the last bad thing that I have to say about Yummy because this is a great movie!

The story wastes little time getting to some gore as we have a morgue attendant stick his head where it shouldn’t go with predictable results. We also get an early bit of gore with what I hope was a zombie dog getting run over… God Damn it movie why did you have to go there? After a bit of character development the proverbial shit hits the fan and the movie gets bonkers. We get several characters that end up separated at first before the survivors come together at the end. They shift between the different plotlines expertly keeping the action rolling and never letting things slow down too much. This is the kind of flick where you will want to be watching everything that is happening. Pay close attention as there are some funny gags going on in the background of many scenes.

In addition to a great bit of writing the movie also has tons of gore. The zombies look great with most of them having identifiable wounds so you can see how they died and sometimes why they were at the hospital to begin with.  Normally when I say the zombies look great, I’m exclusively talking about the makeup but uh there is more than that here. This is a cosmetic clinic so many of the patients are attractive young ladies. God damn there are some cute zombies in this movie! I sort of feel creepy talking about it, but it’s true. If you like your zombies attractive Yummy is the movie for you.

Beyond the creature makeup we get some excellent kills and other gory gags. There are a lot of bites with flesh being pulled off, great latex work, as well as an axe to the noggin. You have a zombie trapped by his own intestines being wrapped around the furniture in a room, a chemical skin peel that is left unattended, a liposuction treatment that goes horribly wrong with explosive results, and puking. How is it that most zombie movies don’t have puking? Think about the smells… I’d puke for sure. There are three gags that stick out for me. One can best be described as Dr. Zombie gynecologist… yeah, they go there. That one isn’t explicit, thank goodness, and is played for laughs. In what I think is an equitable move we also get an extended bit of wang violence where an unfortunate member is set on fire and then flash frozen. This one is also funny. The final gag had me squirming and is horrifying. Mashed fingers and amputation with eyeglass lenses!

Now to be fair to the movies that I complain about there is a quite a lot of CGI in Yummy. Some of the gags lean heavily into some mediocre digital effects work. We even get the dreaded blood hitting the lens of the camera bit that I hate. But there is so much other gore happening that it didn’t bug me. Each time one of these “sins” showed up on screen it was followed up with some practical effect that had me smiling again. I almost wonder if they did it for fans of that sort of thing. Regardless it’s not a big deal.

There is a lot more stuff on my list, but I think I’ve said enough. If you don’t want to check out Yummy, then you probably don’t like zombie movies. In that case why the heck are you here reading my review of a zombie flick? I highly recommend this one.