While poking around on Amazon this movie popped up. It was promoted as a new Italian zombie movie, which caught my attention right away. I love Italian zombie movies… I mean my email is gutmunchers! I figured I’d give it a chance and I’m glad that I did. 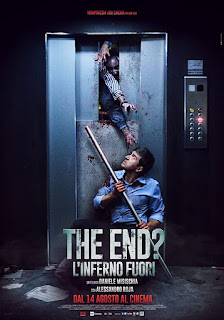 Things kick off with an impatient businessman Claudio who is running late to an important meeting. He gets on the elevator and we see him being pretty awful to his ex-girlfriend whom he still wants to fool around with. This is further complicated when we find out he is married! In five minutes we already know what kind of guy that Claudio is. That is some damn fine screenwriting.

While this is all getting established, we also hear reports in the background of rioting and random attacks. The traffic is also horrible and while he doesn’t know it, we the viewer know that something bad is coming. He arrives at his building and hops on the elevator in time for it to break down. This is where Claudio spends most of the rest of the movie. Trapped with just a sliver of the door open so he can see one hallway. Between that and the phone calls he makes and receives are how we experience the zombie outbreak.

I had my doubts about whether this was going to work or not. One small location and just a couple of actors isn’t something that I’d think would work. But this is such a well written movie that it does. The story is compelling and our lead actor, Alessandro Roja, does a wonderful job selling it to the audience. We get to hear most of the mayhem outside over the phone. While the audio is decent it is his reaction that gives the movie it’s heart. His fear and anxiety are translated to the audience.

This also creates an interesting character arc as he starts off as the cheating bastard of a husband but quickly becomes a man concerned with his wife’s safety. His first instinct when she is in danger is to send someone to help her. There is also a bit with a police officer where he expresses his regret and admits that he is a bad husband. You just know the moment he gets out of the elevator he is going to go looking for her. I think that is kind of cool and not what I initially expected. I like my characters in zombie movies to have some heart so I can root for them.

Since this is a zombie flick, we do have to talk about special effects and gore. I’ll start with the latter. From the small space he forces open in the elevator doors we do get to see several people running and fighting the zombies in the hallway. This allows for a bit of gore, though most of the good stuff happens off-screen. There is one gag where he pounds the hell out of zombie with an improvised weapon and another when he gets his hands on a gun. The best bit though is when he stomps on a legless zombie. But again, there isn’t a ton of blood in the movie.

The creature design on the zombies is topnotch. Each of the zombies looks unique and you can see why many of them died and reanimated. They are very gooey and generally creepy looking. These are fast zombies as they run around, which isn’t my favorite thing. But overall, I was pleased with what I saw on the screen. If you are going to make a zombie flick they had better look good and that is the case here.

I really liked this movie and can recommend it without qualification. It’s a great story that focuses on a main character who just happens to be dealing with a screwed-up situation. The ending is satisfying and leaves the fate of Claudio and the world up in the air. Maybe we get a sequel… maybe we don’t. Either way The End? is worth a watch.

Posted by Gutmunchers Lives at 11:43 PM