When I saw the title I expected a weird mashup of Spaghetti Western and zombie movie, which I thought for sure was going to suck. But right from the start I realized that wasn’t at all what this movie was going to be. That grabbed my interest right away. 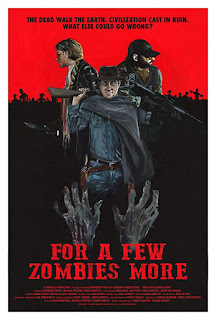 The movie begins with zombies… duh. We see a man ride up to a store on a horse, decked out like a cowboy. He pokes around and seems excited to find a grocery bag of VHS tapes and DVDs. This is Chuck, a survivor of the zombie apocalypse and a former video store clerk who has made it his mission to save the movies. As he states later on, he figures someone is saving the books and art so saving movies is him doing his part.

Later he meets up with a woman who is fleeing zombie eaters, a gang of people that eat zombies! She refuses to give him her name, so she becomes the Girl with No Name. See where the movie gets its title from? They are followed and Chuck is taken hostage by the zombie eaters which leads them to meeting up with Lee, a militia member with a lot of explosives. Eventually the trio end up on a road trip to save a scientist that just might have a cure to the zombie plague.

Okay first I was expecting to hate the character of Chuck. I mean a video store clerk is going to lead to a lot of references which normally annoys the heck out of me. But here it is done very differently, and the writers cleverly avoid zombie references. Star Wars and Star Trek you get, but they hardly mention a zombie movie. When they do it is 28 Days Later and the characters have a brief but funny exchange about it being an infected movie and not zombies. This is just one example of how well this movie is written.

Another example of the decent writing is the pacing. There isn’t a slow spot in the story. The introduction of the characters is doled out slowly as the action moves along. A fatal flaw that many low budget horror movies have is the scene with everyone talking and explaining who they are, which kills any momentum their movie might have. Here you get to know the characters in a more organic way as the story unfolds. Let me yet again mention how annoyed I get when an independent movie spends no time making sure it has a decent script, which is the one thing they have control over and doesn’t cost money. For a Few Zombies More does an excellent job giving us dialogue and a story that keeps the audience engaged from start to finish. 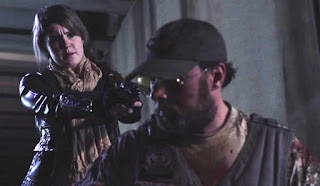 Some other things I wanted to mention would be the cast which, is solid. The zombies look decent, though many have the pasty face with black circles under their eyes. I don’t expect high end latex effects work when watching a low budget zombie movie and can forgive this. Same goes for the kills, which aren’t bad but are also not explicit. I also rather enjoyed the origins of the zombies in this world. I won’t spoil it here other than to say I’m hoping they make a sequel. Phase II is ZOMBIE WEREWOLVES!!!!!

My only complaints are that occasionally the music intrudes on the scene and is far louder than it needs to be. I also didn’t understand the need for the band they run into that is hanging out recording an album in the middle of the zombie apocalypse. Sure, they end up trading the tape later, but then I could have also done without the D.J. Dan bit as well. Both of these scenes seemed forced and felt like a favor to someone. But if that is the worst thing that I can say about your movie then you have done a good job. I’m going to recommend For a Few Zombies More. This is the sort of independent movie that makes me sitting thru all the horrible ones worth the effort.

Posted by Gutmunchers Lives at 11:12 AM