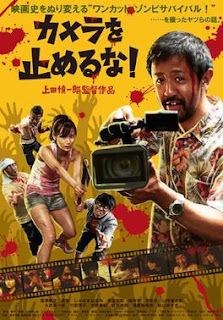 I’m debating how to do the plot synopsis. To do it properly I’m going to spoil somethings and honestly that would be a real shame. So, before you continue, I would recommend that you go and watch the movie. Yes, I’m recommending the movie before actually talking about it. This is one of the most creative and entertaining zombie movies that I’ve watched in a very long time. Now should you continue reading then that means you have agreed to the spoilers and can’t get mad at me.

This is the best zombie movie that doesn’t actually have zombies in it that I’ve ever seen. How exactly does that work? Allow me to explain. The first part of the movie is about what you would expect from a no budget zombie flick. Shaky camera work, awkward dialogue, mediocre special effects work, and an abandoned building as a location. We watch as a low budget zombie movie is being shot, only to have an actual zombie outbreak happen. This is a story that we have seen before, so the movie wasn’t terrible original. I think it had something to do with a curse and haunting of the location where they were shooting. I was rolling my eyes but stuck with it because that is what I do. Then something amazing happened, the end credits rolled.

I’m not being sarcastic with that last sentence. We were about halfway thru when the movie ended. Then the action rolled back to a month earlier. The meat of the story is following the director and the cast as they prepare for shooting what we just watched. It is to be a live broadcast without any cuts, which explains the title. All of the flaws and issues that I was having with the movie are explained in a very amusing and entertaining fashion. This second half is the actual story and what we watched before was just setting it up.  We get to see them overcome the obstacles that occur, which ties into some of the awkward dialogue and weird twists the movie takes. Let me be clear, this is a zombie movie about a crew making a zombie movie where a real zombie outbreak happens but doesn’t. Damn that wasn’t clear at all. 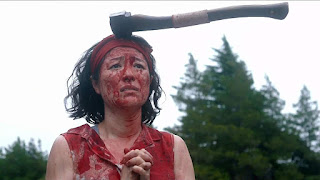 What I thought was a bad zombie flick turned out to be a very creative and funny comedy about the people making it. I love it when a filmmaker plays with an audience’s expectations and gives them something different but still entertaining. It is also amazing how the cast is so terrible when in the movie within the movie but are great when playing the characters behind the scenes. The actors are portraying bad actors but are so good at it that you think they are bad when they are actually great. Confused yet? Not sure if this is due to their talent or the direction, but it worked. They had me convinced I was watching a bad movie before it all shifted around.

There isn’t much more I can say about One Cut of the Dead other than to recommend everyone go out and watch it. Though if you took my advice you already have done that before reading this review. Even if you allowed it to be spoiled for you, I think it is still worth watching. It is currently streaming on Shudder so get yourself a subscription and check it out.

Posted by Gutmunchers Lives at 1:38 PM