Another day and another independent zombie movie. This time I decided to check out a zombie comedy from England. There have been a lot of these zombie being made in England since Shaun of the Dead and some of them have been okay. I wonder where Shed of the Dead will fall? 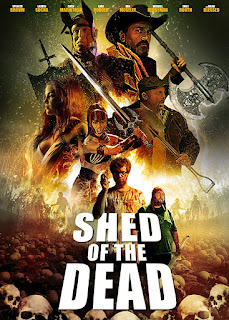 Our main character is Trevor who likes to hang out in his shed painting miniatures and fantasizing about being a wizard and doing battle with the undead. He has a pal named Graham and together they play a fantasy wargame, which is feeding Trevor’s active imagination. There is also a nagging wife, Bobbi, and her best girlfriend Harriet. That is about it for our main characters. After quickly being introduced they are tossed into the zombie apocalypse as the dead rise from the grave to attack the living. The rest of the movie is Trevor and Graham going to rescue the ladies and then the four of them trying to survive the night.

I’ve already mentioned Shaun of the Dead in this review and it is sort of the eight-hundred-pound gorilla in the room. You can’t talk British made zombie comedies without eventually comparing them to that movie. I would think that job number one is to distance yourself from that movie, which is exactly what Shed of the Dead doesn’t do. Our heroes are the same kind of loveable losers that we got in that movie. Instead of video games and hanging out at the pub we get wargaming and hanging out in a basement. Not to say Shed of the Dead doesn’t have its moments, because it does. There are some very funny jokes here, the twenty-eight fortnights later gag was great. They just didn’t do enough to make me forget the movies that came before it and get sucked into their story.

Something that Shed of the Dead excels at would be the normally dreaded stunt casting. This movie boasts three onscreen cameos and a fourth audio one. Bill Moseley plays a serial killer who is enjoying the apocalypse a bit too much but is friendly enough to Trevor and his friends. We also get Michael Berryman in a very small role that consists of him basically wearing an awful wig and a butt plug… don’t ask. My favorite is Kane Hodder playing the snobbish and uptight Mr. Parsons. I’ve never seen him in a role like this and it was awesome to see him get to show off some acting chops. That alone is enough for me to like the movie. Brian Blessed does the narration and it was a treat to hear his distinctive voice.

The gore is decent for a low budget movie. There is a rake to the head, legs get chopped off, a face gets bitten, a tongue gets munched on, and we have multiple zombie kills. Some of it is CGI, which I don’t love, but the kills are well thought out and creative. These zombies are the fresh type with most of them sporting basic makeup. But if you pay close attention you can see the reason that many of them died. That is a pet peeve of mine and they do a great job of that here. All in all, for a low budget modern zombie flick I have few complaints.

This isn’t going to be a movie that I revisit often or possibly at all. It has a “been there done that” vibe to it that takes away from the experience somewhat. Still many jokes land and the zombies are decent enough looking that I can recommend checking it out once. I’ve seen way worse ways to kill ninety minutes.