I saw this one pop up on Shudder and the generally positive reviews for it and I was intrigued. Independent zombie movies are somewhat of an addiction for me so I’m always looking to check another one out. Most of the time I regret it, but occasionally I find a good one. Blood Quantum also had the added bonus of a plot twist I had never seen before in a zombie flick, which doesn’t happen very often. 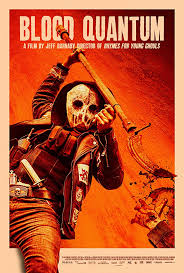 Let me set the scene by introducing you to the town of Red Crow. The inhabitants are made up of whites on one side and the indigenous people on the other. Things kick off in a very creepy way as we watch a fisherman gutting his catch only for them to start hopping around and reanimating on him. Then we meet the sheriff as he answers a call about his ex-wife’s dog, which has died… but not really. He is the son of the fisherman from earlier and both of them are members of the local tribe. This is important later. We also meet the sons of the sheriff, one from a previous relationship and the other the product of his marriage to the ex-wife. They are both in jail, which is where we meet our first human zombie. But it doesn’t take long for the outbreak to happen. Then the action jumps to six months later.

There are a couple important things to note at this point. One the world has gone to hell with the indigenous people barricaded up on their side of Red Crow, which conveniently is an island with a single bridge as entry. Second thru a quirk in genetics they are immune to the outbreak. If you aren’t a member of the tribe the traditional one bite and you turn rule which we are all familiar with apply. But for the indigenous people they can get bit and survive. This leads them to housing and protecting those vulnerable behind the walls of their community. A fact that the older son doesn’t agree with. I won’t spoil what happens with any details but clearly this doesn’t end well.

I have things that I love about Blood Quantum and others that annoyed me. Since the bad stuff is regarding the story, I suppose I’ll begin there. I really don’t like the jump forward in time. My favorite bit of most zombie movies is the initial outbreak and seeing how people react and the world falls apart. That is just a personal preference I know, but it felt like the movie was building up to something awesome when we get the “six months later” popping up on the screen. I was also bummed because there were some things hinted at that were never followed up on.

Additionally, there is a conflict between the older son and his father, who he thinks abandoned him, that are mentioned but never fleshed out. This is huge as it might explain his actions later on. Without that it sort of comes off as random. We also have conflict between some of the indigenous people the whites that treated them badly before the outbreak. I would have loved to seen more of that story and how it affected the characters. I think that there was an interesting story there. This would have also made the subplot of the youngest son’s white girlfriend being pregnant far more tied into the plot instead of feeling tacked on so they could have one scene at the end of the movie. You could have focused more on either story and still had a kick ass zombie movie.

Don’t get me wrong, Blood Quantum is a kick ass zombie movie in spite of my disappointments with the script. The zombies look amazing and show some thought into individual design. Generic zombies are a pet peeve of mine and we certainly don’t get them in this flick. We also get some gore like I haven’t seen in a long time. We get the normal bites and munching, but there are a couple highlights that had me sitting up in my seat. A zombie mom eats her baby on screen and later on we get a lady wang munching on an unfortunate guy! Those two gags alone would make me recommend Blood Quantum, especially with how well they manage the makeup. This is some stellar practical effects work.

Two other things that I need to mention. First, we get a great soundtrack that has a real John Carpenter vibe to it that I noticed right away. That was a solid choice. Second is that in spite of me wanting more I will admit the filmmakers did a wonderful job including a message and making a political point without ruining what is an otherwise solid zombie flick. George Romero is my favorite filmmaker and I don’t think I’ve seen anyone use the zombie genre to deliver a message this astutely since Dawn of the Dead.

This is a pretty good movie that I can recommend. I worry that the hype might make an otherwise fun movie disappointing to a viewer that has been exposed to it. This isn’t a perfect flick, nor is it the classic that some people are trying to claim it is, but it is damn good. Manage your expectations and let Blood Quantum stand on its own. I think you will be pleased.

Posted by Gutmunchers Lives at 10:06 PM