The zombie movies keep coming with this low budget Australian entry into the genre. The small fishing village of Berkeley becomes the unfortunate target of a series of meteorite strikes. As if the damage isn’t bad enough anyone killed by them immediately comes back as a zombie and starts to chow down on their friends and family! Things quickly get out of hand and soon the town is overrun. You might think that is the worst thing that happens to them. But soon after the zombies rise some aliens show up and build a huge wall around the town trapping the survivors in with the walking corpses attacking them. Aliens and zombies! That will ruin your day. 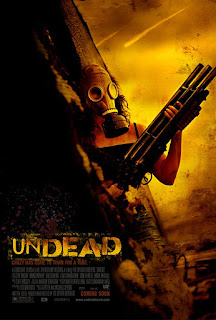 Our main characters are a beauty queen named Rene and a survivalist named Marion. Rene waited one day too long to leave town as she and her agent were headed to the big city when things went to hell. Marion on the other hand has known all along that something like this was coming. You know since he was the town crazy that kept talking about his abduction by aliens. Together with some other survivors they spend the movie running away from zombies, being attacked by them, abducted by aliens, covered in the acid rain that starts pouring from the sky, and generally being terrorized. Do any of them survive? Why are the aliens hanging around? Is Marion a badass action star name in Australia? Some of these questions are answered by the time the end credits roll.

Before I begin the review, it must be pointed out that Undead is not a straight horror movie and is instead played for laughs. This is important because if it weren’t, I’d be much harder on some of the dialogue and characters. For example, the senior constable basically spends the entire movie shouting his lines which are filled with all sorts of creative profanity. Captain Rhodes he is not. But since this is more or less a comedy with zombies, I found the character to be funny rather than annoying. The same goes for the cartoonish violence which includes some of the most absurd Gun Fu that you will ever see. Marion pulls guns from nowhere, hangs upside down, wields a silly three barreled shotgun, and even has an epic fight with a zombie fish! Things get absurd and I have to say I love it.

The special effects work is a mix of bad CGI and decent practical effects work. The spaceship, aliens, and some of the ambitious zombie effects are mediocre at best and sometimes cringeworthy. This was common in low budget movies that were trying to stretch their funds when Undead was made and I don’t miss it. But they also do some good practical work. Heads go flying, a can of soda explodes a head, a brain gets punched out of the back of a noggin’, and we get to see a face come off. The movie gives gore hounds something to sink their teeth into and deserves to be seen for that alone. There is even some work done with an improvised saw blade/broom handle weapon that was bloody and fun.

The movie ends with a twist that itself has another twist added onto it. It doesn’t feel forced and is sort of clever. We are also left with the feeling that there could be a sequel to sort things out, but after sixteen years I suppose that isn’t coming, which is a bummer. If you haven’t caught on yet I’m recommending Undead.