A French zombie movie… Okay that is a new one for me. I don’t think I’ve ever seen a take on zombie genre from France before so what the heck. I mean they couldn’t possibly make it artsy, could they? Then again they are French… 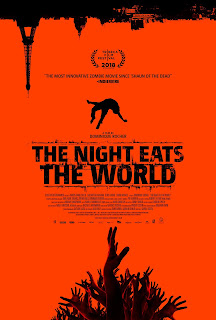 Sam is a musician who has broken up with his girlfriend but chooses to show up at her place to pick up his tapes while she is having a big party. Though that might be her setting him up since it is hinted that they broke up because he prefers to live a solitary life. That plays into the plot of the movie later. Anyway, he falls asleep in a backroom and when he wakes up the world has gone to hell. Everyone is either dead or the living dead. Yep zombies took over while he napped! The rest of the movie is Sam securing the building, gathering up food, and enjoying being alone. That is until he isn’t. I guess not having to deal with other people isn’t so great when you never get to deal with anyone.

This is an interesting movie. It starts off with Sam at first locking himself into the apartment before eventually being forced out to look for food. He isn’t your typical zombie movie character and doesn’t immediately become a cinematic badass. Instead we get a guy that struggles hurting the zombies and would rather trap them or run away. Eventually he is forced to take over the entire building, so he has enough food to survive on. Since he is alone much of this story is told quietly without dialogue. This leads to a sense of isolation that initially we see Sam enjoying, but that eventually wears on him, and because of how the movie is staged it also wears on the viewer. That was a nifty bit of storytelling. But then things go a bit wonky. 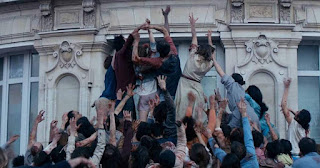 A woman using climbing gear shows up and scares Sam, so he shoots her! This is a bummer since by this time he is craving human company and you think that he has killed his once chance at it. Though he nurses her back to health with the meager First Aid kit at his disposal. At first it was nice to have another character for him to interact with because honestly the movie had slowed way down before this happens. But then there is an odd twist with his new friend and the movie goes complete off the rails. I guess some might consider it clever, but it just annoyed me. Not going to spoil it just in case you want to check The Night Eats the World out.

My final thoughts on the movie are this. It has an interesting story that quickly gets bogged down with a plot that meanders thru our main character collecting canned goods and other such thrilling action. That might be a realistic take on what would happen, but this is a movie and is supposed to be entertaining. Sam does nothing except get progressively crazier from the isolation. When the movie does toss a life ring to the main character and we the audience in the form of the woman it quickly screws that up. While beautifully shot there isn’t enough story to recommend it. If you do watch it, I can’t imagine a second viewing ever being needed so try and catch it on a streaming service or rental.

Posted by Gutmunchers Lives at 5:59 PM