Like many other fans I have a complicated history with this movie. On one hand it feels like it is kind of making fun of the subgenre of horror (zombies) that I love so much. But on the other hand, I also understand that this was a natural reaction to the glut of zombie movies, books, and television shows that were everywhere. I mean suddenly zombies went from niche to mainstream, so this was bound to happen. Plus, the movie itself is sort of harmless fun, but I’m getting ahead of myself. 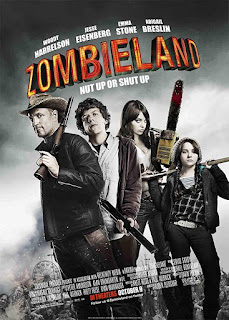 Things kick off with us meeting our main character named Columbus... well that really isn’t his name. All of our characters answer to the names of their hometowns. Something about not getting attached to people during the zombie apocalypse. Getting back to it Columbus has been surviving by using his rules, which will be reinforced again and again as they appear superimposed on the screen. He eventually meets up with Tallahassee, played by Woody Harrelson, and the two of them start to travel together. After a few mishaps while looking for Twinkies they run into a couple of con artists in Wichita and her sister Little Rock. This leads to more zombie related shenanigans and eventually the big finale at an amusement park.

Let me begin by addressing some of the issues that I know fans have with the movie. First, we have the rules and more importantly the breaking of the fourth wall when Columbus speaks directly to the audience to explain them. I think that annoys genre fans because it can feel like the rules kind of make fun of the tropes of the genre and they aren’t wrong. But as I mentioned earlier there were so many of these movies and shows coming out that it became very predictable how they were going to play out. If you look at pop culture when something is this popular it is going to get parodied. In many ways that is what Zombieland is, a parody of the genre.

Though unlike many inferior parodies it also works as a decent entry into the zombie genre. If you can get past the tongue in cheek humor you will see that there are some decent kills and the gore, while mostly digital, is plentiful enough to satisfy those looking for a bloody good time. Well at least this gore hound was happy with it. The zombie designs are also decent, and some thought is put into making the feature zombies memorable with obvious evidence of how they became undead. This is even true of some of the inserts that are shown as flashbacks having nothing to do with the characters or story. The zombie kill of the week gag is a neat plot device to include over the top zombie action without it connecting to the plot allowing them to dream up elaborate kills without having to work them into the story. Who doesn’t love that?

The second issue that I hear a lot of complaints ties about is the cast and characters, which I just don’t get. I understand that Jesse Eisenberg isn’t everyone’s cup of tea and the script doesn't do him any favors by overplaying the nerdy elements of his character. But he is a decent actor and has some chemistry with Woody Harrelson, which gives the movie it’s heart. Plus, Harrelson steals every scene that he is in and gets most of the best jokes. Though as I think about it the movie does play it close to the vest with one character being the typical nerdy guy playing video games and drinking mountain dew while the other is a gun toting redneck that paints an Earnhardt three on every car he steals. Screw it I still like the characters.

Bottom line for me is that you get some zombies, a little bit of gore, some funny jokes, and can turn your brain off for a couple of hours. Not every horror movie needs to be serious or groundbreaking. Some can just be harmless and silly fun. This is exactly what Zombieland is trying to be and I think it succeeds. I recommend it.