Every so often I decide to make a blind buy at my local big box store, normally on an independent movie that was lucky enough to get distribution and some shelf space. Deadsight looked like one of those and it was a low budget zombie movie. I’m always on the lookout for a new zombie movie, which means I’ve sat thru many bad ones. Where does Deadsight fall? Let’s find out. 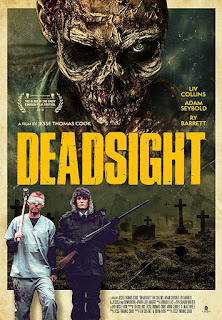 The movie kicks off with a guy, Ben, waking up in the back of an ambulance. He doesn’t know where everyone else is and his eyes are bandaged. He is also handcuffed to the gurney. We watch as he struggles to get himself free and navigate without his sight. It isn’t long before he has his first encounter with a zombie, which obviously freaks him out. Our other character is a very pregnant sheriff’s deputy named Mara. She gets up for work and has no idea that anything is wrong except for her radio not working. That is until she has her run in with an infected, but not yet full on zombie, who carjacks her! Didn’t see that coming… The two main characters eventually meet up and spend the rest of the day trying to survive.

I liked this movie for a couple of reasons. First it does an excellent job of knowing what the budget was and telling a story that they could afford to put on screen. The locations are tiny and easy to control. There is the ambulance, a farmhouse, a trailer, and a power station all of which they use really well. They keep the cast small and the characters isolated so that they never have to explain and more importantly show what is happening in the rest of the world. Way too many of these low budget zombie flicks get ambitious and end up looking terrible as they overuse CGI to fill in the blanks. This movie lets the viewer’s imagination do that heavy lifting for them.

The other reason I enjoyed Deadsight was them making Ben blind, though he slowly gets his sight back as the day goes on. This allows them to do some creepy things with zombies sneaking up on him. There is one particular gag with an open door at the farmhouse that was a lot of fun. Him fighting blindly is also well staged and interesting to see. I don’t think I’ve ever seen a zombie movie with a character like this. If you are going to make a zombie flick you need to have your own twist to make it stand out and I think that those responsible for Deadsight nailed it.


The zombies look decent, though again they were clearly on a budget. Mostly they are fresh as are the infected we get to meet before they go full zombie. The work is effective but subdued. There aren’t any kills onscreen, but some zombies do get dispatched. Sadly, this is done with CGI, including a really dumb disintegrating head gag that they keep using and that looks terrible onscreen.

Normally the lack of practical effects work would be a deal breaker for me but Deadsight feels more like a flick that is focused on the characters and the story. Why was Ben cuffed to the gurney? That is something that is always beneath the surface but never completely explained. There are hints why and that might even play into the ending, but they never give you the wholes story. Sometimes that can be annoying, but there it works pretty well. This isn’t a perfect movie, but it is an interesting one that I’m going to recommend.

Posted by Gutmunchers Lives at 3:39 PM