Well damn it Australia did it again! There must be something in the water down under because they keep cranking out interesting horror flicks. I remember watching the trailer for Little Monsters and immediately adding it to my must-see list. It took a couple months, but it was worth the wait. 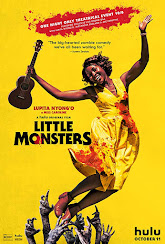 Uncle Dave has a lot of issues, the first of which is that he is a man child that hasn’t grown up. We find this out early on as the movie shows scene after scene of him arguing with his girlfriend. She wants to talk about kids and him getting a job, where he won’t let go of his band, which we later find out is long broken up. This leads to him getting kicked out and moving in with his big sister and her adorable young son Felix. Thru them he meets Felix’s teacher, Miss Caroline, and volunteers to chaperone their field trip to a petting zoo. Why? Because Uncle Dave is smitten with her.

This petting zoo is right next door to a military base where of course they are studying zombies. The undead get loose and soon it is just Dave and Caroline protecting a class of scared kids as they are surrounded by the hungry corpses. Oh, and I almost forgot the best part. Josh Gad makes an appearance as a bitter children’s show host named Teddy McGiggle. Honestly, he has the best lines and steals almost every scene he is in. The character is an unrepentant asshole who is looking out for number one. People die, zombies eat, and the military calls in an airstrike to cover things up before we get to a very satisfying and oddly sweet ending.

That is the strangest thing about this movie. At its core the movie is less about zombies, death, and flesh-eating then it is about Dave growing up and realizing what is important in life. Like I said the movie is sweet in how it shows the relationship between Felix and his uncle developing and how the kid makes him grow up. Don’t get me wrong there are lots of funny lines, again Josh Gad is awesome, and plenty of gore on the screen. Little Monsters delivers those goods while at the same time giving you characters with a story arc that you can root for and identify with. In a market that is flooded with zombies this makes Little Monsters stand out. I consider that to be a good thing. Enough with the love I’m giving the characters and story. We need to talk zombies and gore now. Like I said I was satisfied with that I got. There are several feasting scenes, flesh is torn, people die horribly, and blood is sprayed all over the cast and scenery. If you have read my other zombie movie reviews, you also know that I’m very picky about the design of the monsters. Here they all have their own look and don’t feel like an assembly line put them together. The featured zombies have obvious signs of how they died and look gruesome. Most of them are fresh so the makeup doesn’t get too elaborate but what we do get is well executed.

Clearly, I’m going to recommend Little Monsters to you. It gave me what I expected from a zombie movie while giving me a story I didn’t see coming. This is a perfect example of a filmmaker who didn’t forget that they needed an actual story and just not a bunch of gore. Check this one out, you won’t be disappointed.

Posted by Gutmunchers Lives at 3:34 PM