I saw this sitting on a shelf at one of my local discount stores and thought I’d give it a chance. I’ve never seen the first two movies, but this was cheap. I took it home and popped it in the old player to see what I had. First thoughts… not too bad. 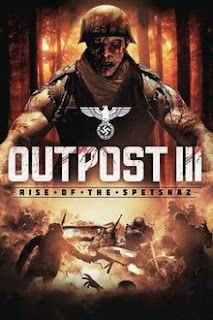 The movie takes place on the Eastern Front as WWII is winding down. The Spetsnaz are Russian special forces that have been terrorizing the German army. We see one unit setting up an ambush of a German column and after they successfully kill the enemy, they themselves are ambushed. We end up with a couple survivors deep underground in a German facility. The Nazis are experimenting with zombies and decide that the Russian commandos are a perfect way to test out the effectiveness of their latest batch. From here on out it is all violence and mayhem.

This is a perfect example of not trying to overthink your movie. The movie establishes the characters quickly, tosses the good guys into the shit, gives us some bad guy Nazis, and then lets the craziness roll. Seriously this movie is packed with all sorts of action as zombies get beat down, but not before they tear into the living. The plot is a bit thin, but they more than makeup for that with the action. Sometimes lots of well-choreographed fights are a fine substitute for plot. That said the whole idea of trained zombies as weapons is cool and the one we get to see the most is chained and used like a hunting dog. I just dig the whole thing.

I realize that I’m maybe selling the story a bit short. Let me be very clear that the movie does make an effort to explain what is going on. We even have a Nazi Scientist that loves to chatter on to our characters what is being done to them. I believe that this is all supposed to connect into the earlier movies in the franchise, but I can’t speak to that. I can say that not having seen the first two Outpost movies took nothing away from my enjoyment of this one. 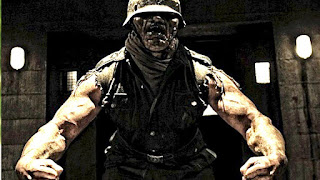 The zombies look decent. These are less the mindless undead you are used to and more homicidal former soldiers who are twisted up and enjoy killing their victims. While we do get some munching on the humans don’t expect a big feasting scene as that aren’t what these undead are all about. Ignoring some very well staged battle scene at the beginning we get a respectable ten kills in Outpost III. Necks are slashed, guts munched, heads are bashed, another explodes, we get an axe to the noggin’, brains are blown out, and eyes are gouged. Most of these are in your face and done with practical effects work. I appreciated that.

This is weird because while I enjoyed this movie, I don’t have any desire to track down the prior entries. Still I have nothing bad to say about Outpost III and can recommend it to anyone looking for a good violent zombie flick. It can be found easily and cheaply all over the place.

Posted by Gutmunchers Lives at 2:00 PM