My series on remakes that I don’t hate continues with this rehashing of the William Castle classic House on Haunted Hill. They were going to be hard pressed to find someone to fill the lead role that was held down by Vincent Price in the original. They did a decent job, and it doesn’t hurt that this one is more of an ensemble cast. But I’m getting ahead of myself here. 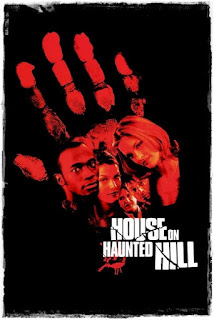 The movie opens in the past in a creepy hospital where horrible experiments are being conducted by a crazy doctor played by everyone’s favorite Jeffrey Combs. Some bad things happen, and the patients get loose murdering most of the staff and setting the place on fire. Years later a family purchases the place and tries to make it a fancy home, which of course is a horrible idea. This flashback morphs into a television show hosted by Peter Graves. If you have ever watched Mysterious Monsters, you will know why this is awesome.

After this is established, we then move onto the main cast. Much like the original we have a rich man, named Steven Price in a nice nod to the star of the original Vincent Price, throwing a party for his wife. They don’t like each other, and it is established that she has already tried to kill him a couple of times. The guests are all strangers and are offered a million dollars if they stay the night in the house. If any of them die, then their money will be split up by the survivors. You know that is sort of asking for trouble, right? There is some debate and the owner of the house, Watson Pritchett played by horror icon Chris Kattan (inside joke sorry…) gets stuck in the place when it goes into lockdown. They are trapped until morning with some homicidal ghosts. Not a great party if you ask me.

This is an example of how you should remake a movie. Much of the narrative is brought over from the original including the feuding spouses, the guests being strangers, and the attempted murder for financial gain. But then they add more depth with the fire and the house being a formal asylum. In the original the guests were really strangers chosen to be witnesses for the murder to help the murderess cover her tracks. While the murder plot is still in the story, we find out that the house reached out to invite the descendants of those who survived the fire. Yes, ghosts can use the internet in this movie! Also remember I said that most of the staff died. The house has some unfinished business I suppose. The fact that this is kept secret for a big chunk of the movie and when we get to the end the survivors share a special trait it makes a lot of sense. They took an already fun premise and built on it while keeping what worked. Why is that so hard for other filmmakers?

We get the requisite jump scares, and the sets are appropriately creepy. The kills are creative and fun but not too gory. There is an electrocution, stabbing, pencils thru the neck, and the evil wifey Evelyn is absorbed by a shadow. There are some post kill scenes that are fun as well with a faceless guy and a lady gameshow host put on display. Much of the gore is practical work and is decent but there is also some CGI that doesn’t hold up great. Overall, I was pleased with the kills, gore, and ghosts.

Let me finish up with the question that is always on people’s mind when a classic starring a legend is remade. Vincent Price chewed some scenery up in the original and was awesome while doing it. How do you replace him? Well first thing is cast an excellent actor like Geoffrey Rush in the role. He does a wonderful job. Then you surround him with a cast of actors that can help him carry the movie. Here we get Taye Diggs, Famke Janssen, Peter Gallagher, Chris Kattan, Ali Larter, and Bridgette Wilson as our cast of victims. Toss in some work from Jeffery Combs and you have a lot of talent onscreen.

What we have here is a movie with some scares and a creepy vibe. The original is still my favorite, but I’d be lying if I said I didn’t watch this bad boy every year around October. I recommend that everyone give House on Haunted Hill a chance remake or not.