I get a lot of links for trailers sent to me from friends, family, and people trying to sell me on their flick. Honestly most of the time I’ve already been aware of the movie or am total disinterested. But I always take a couple of minutes to check them out because you just never know. When I clicked on the trailer for Fatman and saw a crusty slightly pissed off Santa Claus movie where he does battle with a hitman, I was all in. Now this is the sort of holiday flick that puts a smile on my face. 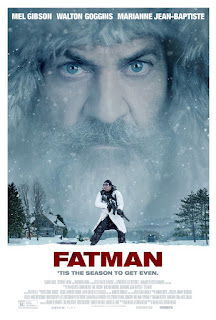 The movie kicks off with this snotty annoying overachiever named Billy sending off a letter to Santa. He is a rich kid with an absentee father who steals money from his grandmother to hire a hitman/enforcer to intimidate a young lady into giving him her 1st place Science Fair ribbon because he doesn’t think she should have beat him. Yeah, the kid is a little sociopath with some serious entitlement issues!

Santa, played by Gibson, realizes this and poor Billy ends up with a piece of coal for Christmas. This leads him to send his hitman, portrayed by a scene stealing Walton Goggins, to kill Santa. We see that the hired gun also has an axe to grind with Santa because of his collection of toys made in Santa’s workshop. If that isn’t twisted enough for you, we also see that Santa is subsidized by the government to help stimulate the economy with his holiday cheer, but things have been off and the payments are much shorter then they need to be. So, the elves get hired out making circuit boards for the military’s latest jet fighter.

Eventually there is a big showdown at the North Pole with a lot of bodies hitting the festively snow-covered ground. Santa survives… because you basically can’t kill him. It is like he has mutant healing powers or something. Billy gets a visit from the titular Fatman where he is warned Santa had decided to become more proactive with his naughty list. What does that mean? I hope we find out in a sequel.

I loved this movie. It is so weird which I sort of expected with the crazy concept. Gibson is perfectly cast as the crusty worn-down Santa Claus. Goggins is awesome as the hitman and as I mentioned above steals every scene he is in. These guys are playing this material deadly serious and it works. In fact, I was expecting this to be a comedy and it really isn’t all that funny. Sure, the concepts of Santa’s workshop contracting out as a military supplier is amusing, especially the scenes with the Elves talking to the soldiers, but it isn’t played for laughs. This is more of an action movie with lots of blood spraying and bullets flying. I didn’t expect that at all when I sat down to watch Fatman.

Gibson and Goggins are the only actors doing a great job. Chance Hurstfield shines as the twisted little shit Billy. He is excellent playing what comes off as a prepubescent mafia boss. There is a real sense of danger with the character as you think he might have sent someone to kill his Science Fair rival’s parents in revenge for losing. Again, this could have been played for laughs but it isn’t. This kid is a great actor. 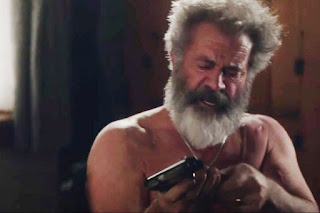 A few other things I wanted to mention. The plot is solid and paced very well. There isn’t a wasted scene between the opening credits and the big showdown at the end. The characters are well established, and the movie does some good worldbuilding setting things up so that the viewer can believe and more importantly become invested in what they are watching. The action sequences are spot on and executed well. There is enough violence to keep action movie fans interested. Honestly, I can’t think of a single thing that I don’t love about Fatman.

This is going to become a new Holiday tradition in my house. I think that Fatman will pair nicely with my other favorite Christmas flick, Die Hard. I see many Gibson and Willis double features in my future. Do yourself a favor and check this one out. I highly recommend it.