I’ve mostly been covering old seventies made for T.V. movies in these marathons. But I thought I’d switch things up with some newer Sci Fi channel flicks. And yes, I know they have some douchey way of spelling it now. Not going to do it… not ever! With that in mind lets dive into some creature feature goodness with Wyvern. 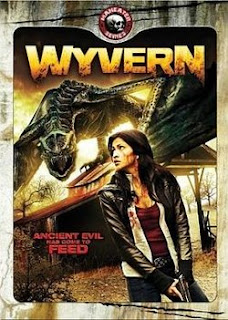 This is a very simple setup. You have a small Alaskan town coming off of ninety days without night, which is a thing that happens when you go that far north. Everyone is a bit jumpy and ready for a good night’s sleep so when a few locals start talking about a giant flying lizard swooping around no one really buys it. Probably should have since we the viewer know that there is a monster killing off anyone or anything that has the misfortune of crossing its path. The Wyvern, which we find out in a bit of exposition, is a Nordic dragon has been released from the ice due to that pesky global warming stuff. They need to kill it before it kills all of them and before the eggs they found hatch. Luckily our hero has some awesome big rig skills and a new truck that is perfect for the job.

For a few years there the Sci Fi Channel was cranking out old school “B” monster movies like crazy. This is a perfect example of that as it follows the classic creature feature formula. An isolated group of victims/heroes, a monster that no one saw coming or believes exists, the flawed hero with a past, and a love triangle with a damsel in danger. Here we have an Ice Road Trucker (way to tie another popular show into the movie!) who is doing odd jobs and waiting for his replacement rig to be delivered. Clearly there is something dark and disturbing about how he lost the previous truck and his brother that will play into the big finale.

We also meet the local doctor who is his primary competition for the love interest that runs the local café. Of course, he doesn’t have much chance of making it, nor does the local law enforcement who definitely are going to end up as Wyvern chow. Now don’t get me wrong in spite of being very predictable this movie does a good job of making you like the characters before they meet their doom. We also have some fun dialogue and set pieces that make the movie very entertaining in the sort of cheesy way that a flick like Wyvern should be enjoyed. Manage your expectations as a viewer and understand what they were trying to do with this one and you will have fun for ninety minutes.

The creature is all CGI and for the most part looks decent on screen. Towards the end when it attacks the big rig there are a couple cringe worthy shots, but I feel like that is the equivalent of bad stop motion monsters in old school creature features so I’m willing to give Wyvern a pass on that. The kills are mostly off screen and you get a rubber limb here and there. Again, you really need to manage your expectations and understand what you are getting into with this movie. It is meant to be a silly monster movie and is exactly that.

One final note before I finish up. The late Don Davis plays the local prepper/crazy along the lines of Bert Gummer from the Tremor’s franchise. This is one of the last roles that he filmed before passing away and it is a decent one. It was nice to see him chewing up scenery as the Colonel. He was icing on the cake, a cheesy cake filled with monster movie goodness that harkens back to the “bad” creature features that I grew up watching. I found Wyvern to be surprisingly fun and recommend that you check it out.

Posted by Gutmunchers Lives at 3:55 PM