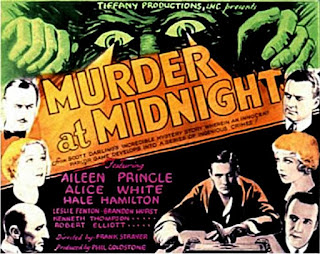 I stumbled over Murder at Midnight in a collection of public domain movies. It was from a studio that apparently lost most of its catalog in a fire with this being one of the few that has surviving copies. It doesn’t star anyone that I recognize but it has an interesting premise, so I thought I’d take a look.

The story takes place during a party in a mansion where some participants are playing charades. Though this isn’t the game that most of us think of and is instead a little drama where a man finds his wife cheating on him and shoots her lover. They are supposed to guess at a hidden word that is tied to the event. Of course, no one cares about that when they realize someone swapped the blanks out with real bullets and their host, Mr. Kennedy, killed the man!

Before they can figure out who did this Kennedy is murdered and despite it being made to look like suicide, the police see thru it. This is with the help of famed criminologist Phillip Montrose who was fortuitously at the party as a guest. The rest of the movie has a missing will, more murders, some twists, and turns until we finally get to the big reveal at the end. And what a reveal that is. Murder at Midnight has one of the best twists in any mystery flick that I’ve ever seen. Really, I did not see this ending coming.

I really do love the plot of Murder at Midnight. The writers lull us into a sense of complacency by giving us the characters we would expect from the genre. You get the private investigator in Phillip Montrose, the police officer, the innocent man, and lots of red herrings. There is also the elaborate trick, in this case a killer telephone, to explain some of the killings. Toss in the black gloved killer, figures moving around in the shadows, the mysterious missing will, and you get a decent way to kill an hour or so. For most of the movie I was very comfortable in thinking I knew what was happening and was shuffling thru the suspects trying to guess who the killer was and why. Then they pull the rug out from under me and give me a twist I don’t think I’ve seen before. 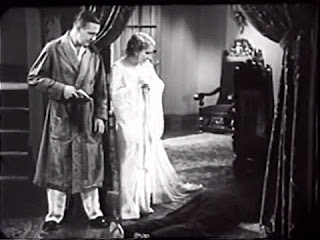 It is clear that I dig this movie. But I must warn anyone that is going to watch it that the only copy available is from a beat up sixteen-millimeter print. Again, this is from a small studio with most of its catalog being lost films. What that means is the audio and video are a bit rough. Now as a guy who grew up watching stuff like this it doesn’t bother me at all. But if you are used to HD picture and stereo audio then I could see it being an issue. There are a couple spots where the dialogue is almost lost in the static, and I feel like there is at least one splice where the picture jumps. But for me that is part of the fun, and better to have a bad copy of a movie then none whatsoever.

This is a must watch for anyone that wants to do a deep dive on old school movies, especially of the mystery variety. You can see how it is staged as if it was a play, while also seeing some early attempts at the multiple takes that would become standard later. Plus, there is that wonderful twist which plays with the audience’s expectations. This is a fun movie that shouldn’t be hard to find as it is out there on the internet for free. Murder at Midnight is certainly worth your time.

Posted by Gutmunchers Lives at 4:04 PM