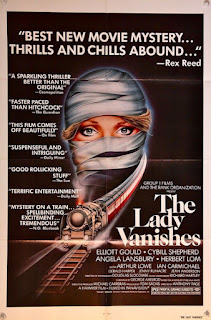 I’ve decided to watch and review a few mystery movies for the site. They don’t necessarily fit in with the stuff that I normally cover but I do love these movies so I suppose you will all just have to deal with it. Or just not read these. What better place to start than this remake to a classic Hitchcock flick? I’ve never seen this one and am very excited to check it out.

The movie is set in Europe, specifically Austria, which is under control of the Nazis. We meet a crazy American heiress named Amanda. She likes to drink and when she drinks she does silly things like impersonating Hitler in a bar full of Brown Shirt Nazis! We also meet Robert, another American, who is traveling thru Europe in his role as a photographer for Life Magazine. They end up on the same train headed away from Germany. Amanda meets a nice older English woman who helps her with the terrible hangover she is nursing. Eventually she falls asleep but when she wakes no one remembers the woman, Miss Froy, at all.

This leads to a lot of running around the train cars as she is told again and again that there was no Miss Froy. She ends up with Robert and while he doesn’t initially believe her somethings don’t add up for him. Before long the pair are running around, asking questions, and eventually running afoul of the plot to kidnap the woman. Why? Well, that is part of the fun that I’m not going to ruin her. Though I suppose the fact that there are Nazis should be a bit of a hint.

I have always enjoyed the original from the late thirties, but I think that this remake surpasses it. The story is just as solid, but I think benefits from better pacing. The action starts when the train pulls out of the station and doesn’t end until the final scene. Along the way we get some action as well as an interesting performance from Elliot Gould as Robert. He plays our main character as a bit bumbling and not all that suited for the action. Toss in Cybill Shepherd as Amanda and you get a cool romantic comedy vibe that the original didn’t have. That is a very seventies thing to do, and I rather liked its addition here. Of course, it helps that the pair of them are great actors that have chemistry and are fun to watch.

The best part about The Lady Vanishes, at least for me, is the lady herself played by Angela Lansbury. She is excellent as always and while she doesn’t get as much screen time, she does vanish you know. When she is on screen it brings the movie up another notch. We also get Herbert Lom as a seemingly helpful doctor… never trust a German doctor in a movie like this. Speaking of Germans Wolf Kahler shows up as a Nazi. You might not recognize the name but a couple years later his face gets melted by the Ark of the Covenant.

Most mystery movies revolve around a murder and become a who done it. This is different since it is a kidnapping. I’m not even sure anyone dies in this movie. Well okay one weaselly dude does but he deserves it in a very Neville Chamberlain sort of way. Sorry had a history nerd moment there. Use Google to see what I’m talking about if you really care to. Getting back on track the who and why of this story is well done. All the pieces fit including those not involved in the conspiracy keeping silent for their own reasons.

A well written flick with a great cast. I found this movie to be entertaining and worth a watch. If you get the chance and enjoy a good mystery or romantic adventure, check out The Lady Vanishes. Oh, and the earlier version from the thirties is also really good in case you were wondering. Consider both recommendations from me.