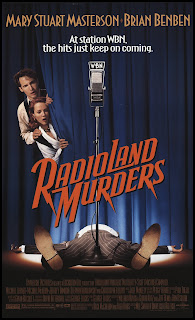 This seems to be a forgotten movie from George Lucas, who produced, and starring so many familiar faces that it borders on the absurd. This is also a loving throwback to the wacky comedic murder mysteries of the thirties and early forties. So of course, I had to cover it here during the marathon.

The year is nineteen thirty-nine and General Walt Whalen is launching America’s fourth radio network, WBN. The first night’s programming is live, and he is hosting all his potential affiliates to lure them into joining the network. Because this is their one shot and everything is being broadcast live when a couple of folks die after a mysterious voice interrupts the program no one stops. The show must go on you see.

Though when it is clear that someone is bumping off the stars of the network, they do call the police who try to unravel the murders all while the wacky goings on continue in the background. Unfortunately, married couple, Roger and Penny, get tied up in the nonsense as she gets promoted to director and station manager when the former holders of those jobs die, and he gets arrested when he keeps showing up at the scene of the crime. Though innocent the only way Roger can avoid going to jail is by escaping and leading the cops all thru the building trying to find out who the real killer is. Cue the craziness.

This movie captures everything that I love about the movies it is reminiscing about. We get lots of slapstick and physical comedy that is well executed and genuinely funny. This isn’t a series of nut shots that many new movies use as phycial comedy but instead the sort of orchestrated movements and chaos that is entertaining and hilarious to watch. The dialogue is snappy and always funny. There is a pacing to the delivery that most new movies don’t have anymore. A lot of the actors that were in these old movies came out of vaudeville so there is a timing and rapidity that is unique to that time.

I think that they get around this by casting some of the funniest and most talented comedians available in the nineties. Michael McKean, Brian Benben, Jeffrey Tambor, Christopher Lloyd, Bobcat Goldthwait, Robert Klein, Stephen Tobolowsky, Larry Miller, and Harvey Korman all show up in parts. Korman is awesome as the drunken writer and plays that party up to the nines. Mary Stuart Masterson is also awesome as Penny and holds her own with all the comedic talent on display. It took a special cast to make this work and they found them. Radioland Murders also dips in for some familiar faces in what is maybe not more than glorified cameos but appreciated none the less. Ned Beatty, George Burns, Brion James, Rosemary Clooney, and freaking Billy Barty! Talk about an all-star cast! 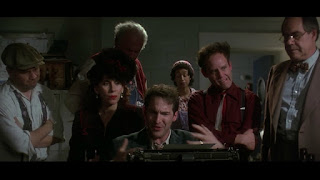 Notice I haven’t even talked about the story at all. The mystery here is fun and when it is finally revealed who the killer is the motive makes sense. Though this movie doesn’t give us any clues along the way to guess at the murder’s identity we get enough other stuff to enjoy that I didn’t mind that. I also appreciated that despite how funny Radioland Murders is they aren’t afraid to go dark when someone dies. I need some murder in my comedic murder mysteries you see.

If you haven’t figured it out yet I love this movie. I used to think it was a remake of Abbott and Costello’s Who Done It? But other than the setting and the murders it doesn’t seem to be. Though that movie has many similar characters like the General running the station and the Bell boy character running around. So, I feel like someone involved in Radioland Murders definitely saw that movie. Regardless this is a blast and a movie that I can highly recommend. Do yourself a favor and check it out.