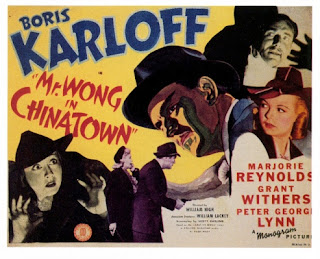 As I have with all the other reviews of movies like this, I’m going to direct you to my thoughts on casting white actors in Asian roles. I don’t want to keep rehashing the same discussion so this review will mostly focus on the merits or perhaps lack of them as a piece of entertainment. With that out of the way lets jump into reviewing Mr. Wong in Chinatown.

The action kicks off with a mysterious woman coming to ask for Mr. Wong’s help. But before he can speak to her she is murdered in his living room. It turns out she was the victim of a poison dart from a sleeve gun. Wong calls the police and not long after they arrive a lady reporter shows up. She recognizes the woman as a Chinese princess that just arrived in San Francisco. This leads Wong to a twisted web of theft, lies, double crosses, and murder. You see she was in America looking to buy airplanes to smuggle out of the country to her brother’s army. This sketchy business attracted the attention of criminals who took advantage of her.

Does this sound familiar? Well damn it the Mr. Wong franchise got me again… sort of. If you remember my earlier review for The Mystery of Mr. Wong they had lifted that plot from an earlier movie, Murder at Midnight. A movie that I had just reviewed for the site! Here it is the other way around and this movie was remade as a Charlie Chan flick, The Chinese Ring, which I’ve also justcovered for the site! I hope this doesn’t keep happening, but with these quickie low budget movies it is a possibility. I liked the story in the Chinese Ring and that was apparently almost a shot for shot remake of this one. There are a few differences that I appreciated about Mr. Wong in Chinatown. First is that instead of the villainous ships captain being Chinese here he is an American. It makes me wonder why the later Chan movie changed it. The idea of the Chinese trying to purchase war materials secretly makes a lot more sense in the world of thirty-nine then it does in forty-seven. For those that aren’t history nerds they were fighting the Japanese and by the time this was remade the war was over. Yeah, I notice things like that.

Karloff is a much better lead. His performance is subdued but interesting. He doesn’t need the comic relief and can carry the movie all on his own. It is also even more obvious with this being remade eight years later as a Chan flick that Karloff doesn’t attempt to use a stilted accent, nor does he spout off proverbs. Instead, you have a respectful portrayal with his normal voice and delivery. Not an excuse but I do want to acknowledge the attempt at not being as offensive. We also get a fun appearance from a familiar little person in the role as a mute witness who ends up on the wrong side of the criminals.

The killer’s identity, the double crosses, and Karloff’s performance makes this a movie worth tracking down. Like the other Mr. Wong flicks this is in the public domain and can be found easily both on DVD as well as the internet. I think it is worth checking out.