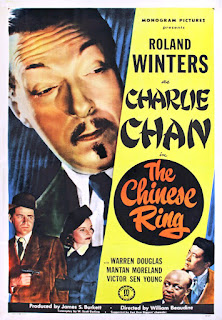 Time to check out the first of the classic Charlie Chan movies that I’m going to cover here at the website. As I’ve already mentioned I’m aware of the baggage that these movies have. I’ve discussed my thoughts on the subject of a white actor being cast as a Chinese character here. The review that follows will just look at the movie as entertainment and will be judged accordingly.

When a mysterious woman comes to see Charlie Chan at his home but is murdered before he can speak to her it sets him off on a search for who she was and why she had come to see him. Quickly he realizes from her ring that she was from a powerful family and after some digging, he discovers that she was in San Francisco to purchase some airplanes for her brother’s army. Being neutral this had to be done on the down low and there is a ship waiting to secret the airplanes out of the country. The only issue with this is that there aren’t nor were there ever any planes. Someone was stealing her money, but they didn’t all of it yet. So then who killed the woman and where is the rest of the cash? That is what Chan has to sort out before it is too late to catch the killers.

This is actor Roland Winters first outing as the character and I have to say he isn’t my favorite. He would get more comfortable in the role but here it seems very stiff, and he lacks the warmth of Sidney Toler. I was also disappointed in the fact that Tommy and Birmingham Brown felt like they were shoehorned in. They aren’t given a lot to do which is disappointing given how much the previous entries relied on their antics to keep things moving and entertaining. They feel sidelined and with Winters’ lackluster performance they were needed greatly. 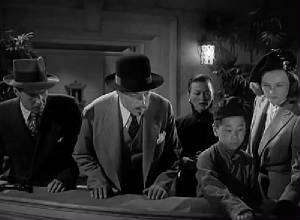 The mystery itself is solid with plenty of suspects and a good twist as to the identity of the killer. But overall, this wasn’t as much fun as I was used to seeing from these movies. Things drag a bit, which is odd for a movie that barely cracks an hour long. That is doubly so since the director, William Beaudine, is one of my favorites and normally gives you all you could want from a low budget flick like The Chinese Ring. There is also a dark turn with a child being murdered that changes the mood of what is normally a fun little murder mystery. I mean I get that all of these movies have a death that is to be solved, but a kid? And that isn’t even necessary to the plot. That just seems mean and again wasn’t something that I expected.

I know that I like some of the later Winters’ Charlie Chan entries much better than The Chinese Ring, but I’m finding it very hard to recommend this one. Honestly this is probably only for those completists that need to see them all. I promise I’ll cover some much better flicks later in the mystery review marathon.

Posted by Gutmunchers Lives at 7:38 PM