Murder on the Blackpool Express (2017) 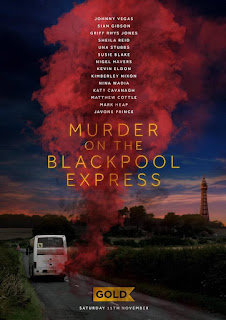 I found this one while digging thru some streaming services. It is the first of a trilogy of movies that gently and lovingly poke fun at the mystery genre. Even the title is a take on the famous Agatha Christie book Murder on the Orient Express. I thought it might be fun to check out something different for the marathon, so I hit play.

The story is deceptively simple. A struggling tour company schedules a trip with an author where he will show his fans some of the locations that inspired the murders from his books. We get an odd group of characters including an unpleasant wheelchair bound woman and her caregiver. Some elderly ladies who have snuck out of their home. A woman and her browbeaten husband as well as the sort of sketchy author who seems more inclined to sell them merchandise than talk about his books. At the very first stop there is an “accident” where one of the elderly ladies chokes on a roll. That is followed by more deaths and the tour guides figure that someone is killing off their passengers. But why is this happening? And why the heck do they keep rolling to the next stop?

I very much appreciate the fact that the writers of the script made an effort to explain these two previous questions. The tour company is on it’s last legs and needs the cash. The author is also desperate for the money so basically, they insist that the show must go on. That said we do see some people bail on the trip and those that don’t end up having good reasons not to. Again Murder on the Blackpool Express is being played for laughs and is a parody so they could have just ignored it, but they don’t. This also explains the effort and attention to detail involving the mystery. This is a legitimate who done it. We have a mystery that is both plausible and satisfying. When we find out who the killer is and why they are so homicidal it not only makes sense but give what we have seen of the characters to that point it works. I can’t say much more without spoiling the fun and I don’t want to do that. 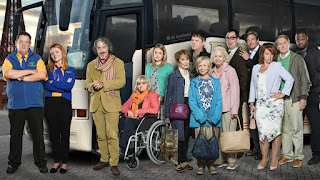 The cast is made up of folks that I don’t recognize but from a quick IMDB search they seem to all have rather extensive careers in British television. The one actress who I did recognize was Una Stubbs. She was Mrs. Hudson in Sherlock and was excellent in this movie as one of the older women. She has some of the funniest lines and has excellent comedic timing. Overall everyone in the movie is excellent and perfectly deliver some of the best and at times snarkiest dialogue I’ve heard in a very long time. I can’t think of a time where I’ve been so entertained by the mystery while also laughing as hard as I did here.

Obviously, I’m going to recommend Murder on the Blackpool Express. This was a blast and can be found streaming on I believe Acorn as of the writing of this review. I can’t wait to check out the sequels. If they are half as fun as this one I might have a new favorite series.