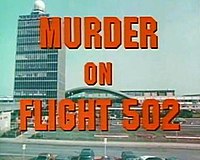 Our movie starts with first class passengers waiting in the lounge for their trans-Atlantic flight to board. We are introduced to several passengers and get a bit of character establishing if not development. They all get on the plane and take off, but after the flight has left a letter is found talking about the murders that they now know have occurred on the plane. Only it wasn’t supposed to be read until much later so the killings haven’t happened yet. The captain is informed and with the help of a detective who happens to be traveling to England he tries to figure out who the soon to be murderer is so they can prevent the crimes from happening.

Spoilers… the murders happen. We get an explanation involving revenge, smuggling, murder, and a robbery gone wrong. The killer is exposed, and we even get a neat twist at the very end that while it doesn’t change the story is a nice added touch.

This movie checks a lot of boxes for me. It is a made for television murder mystery starring a lot of familiar faces in a straightforward who done it. Is it a great movie? Honestly not really. The story takes too long to get rolling with the threatened murders not occurring until after an hour of the ninety-minute runtime has passed. It is kind of interesting that we aren’t sure for most of the movie who the murder victims are much less who the killer is. They do a decent job giving us several possible motives/victims/suspects.

One by one the “red herrings” are eliminated until we finally find out the truth. But after that it does get interesting and while I saw the twist coming it was executed in a satisfying way. The final scene after they arrive at Heathrow Airport is sort of sad as the killer is delusional about what has just occurred. But as much as I dug the last half hour of Murder on Flight 502 the first hour’s glacial pace just kills any momentum that the movie could have created. I can’t imagine myself needing or wanting to watch this again. Though if I did it would be because of the cast. 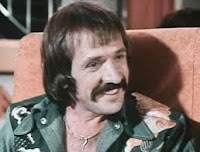 We get Ralph Bellamy, Hugh O’Brien, Brooke Adams, and Danny Bonaduce in supporting roles. They aren’t asked to do much but at least the cast is good enough that when we are forced to sit thru some endless dialogue it is delivered with some skill, and they are fun to watch. Sonny Bono also appears as a sort of washed-up singer with a past that might have him targeted as the intended murder victim. A pre-Charlies Angels Farrah Fawcett also has a small role and is decent. Though my personal favorite is Robert Stack as the captain who plays this character exactly as he did another pilot a couple of years later in Airplane. It is odd how it works in both roles.

This is a flawed but interesting artifact of the mid-seventies. I loved the cast but wasn’t thrilled with the story. The connection of the Robert Stack performance with the parody he would pull off a couple of years later in Airplane also give it a fun connection to that classic bit of hilarity. While I can’t recommend it to everyone if you are a child of the seventies like me you will probably get some fun nostalgia from Murder on Flight 502. You can find this one floating around online for free so that seems like the right price. Just manage your expectations.

Posted by Gutmunchers Lives at 10:40 PM