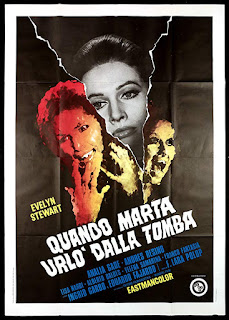 I’ve learned that if it is Spanish Horror and doesn’t star Paul Naschy then I might want to skip it. Now that I’ve said that Murder Mansion popped onto my Amazon Prime list and I thought the title was cool. Though apparently it was also released as Maniac Mansion. Hey, it’s from Spain so there has to be a few titles. I queued it up and hit play, and started regretting my decision immediately.

Some people end up in a house by the cemetery. There is a creepy dude in a sweet fastback mustang, another dude on a motorcycle, a lady that was riding with mustang guy, but he got fresh. So now she is hanging out with motorcycle guy. There is also a lady that is going to get some important papers and a couple that is following her. They all end up in an abandoned town where they meet up with a beautiful woman living alone in a creepy house. There is talk of ghosts and vampires as well as spooky stuff happening. Then a guy gets scared to death, some other “bodies” are found, and we get the big twist ending that was obvious from the midway point of the movie.

Be warned there are spoilers coming. The whole thing is a setup to drive the lady going to get the papers crazy. Early on we see that her husband tells her he is waiting for the lawyer so that he can drive these papers to a meeting that has to take place the next day. But as soon as he hangs up there is a girl that he hops in bed with. They argue, and we are told that the wife doesn’t sleep with him anymore. Are there really papers and a deadline? Nope he is just tricking her into driving on old roads at night so that she will end up in his elaborate trap. There they fake all the spooky stuff to drive her insane so theoretically he gets control of the family fortune. It’s all really confusing, especially when you add in all the people that weren’t supposed to end up at the house with them.

I could try to explain more but it is pointless. It isn’t that this movie doesn’t have a plot it’s just so convoluted that it kills the fun. We have attempts at sleazy behavior both in flashbacks, which really confuse the situation, as well as the fake lady vampire who meets them at the house. She fakes seducing both a male and female character, actually scaring one to death. The movie also gives us the walking around in crypts and outside in the fog scenes that most of these Spanish horror movies do. Sadly, they are staged poorly and what does work gets lost in the mess that is the plot. It is sad but I didn’t really care about the characters and what they were up to. Hell, they even reveal the twist early when a supposedly dead character is found sleeping in a bedroom! The movie had one thing going for it and they ruined it.

This movie is just mediocre. It tries really hard but fails to generate any interest, reveals the big twist early, and leaves too many plot holes to make sense. I wanted to like it which is why I gave it a shot, but Murder Mansion wasn’t worth my time and it isn’t worth yours. I don’t recommend it. If you really must watch it I've linked to the entire movie at the top of this review. You have been warned.