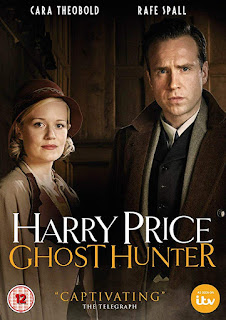 I’ve had this on my Amazon Prime to watch list for a while now. I’ve recently been on a haunted house/ghost story kick, so I figured it was time to check it out. Plus, it is a British production and I’ve had some great luck recently with spooky stuff from England.

Set immediately after World War I the movie opens with Harry Price conducting a bogus séance to milk some cash out of a frightened family. He asks them to leave the room so he can cleanse it which allows the audience to watch him gather up the devices he used to trick them. He collects his cash and heads home. Waiting for him on his front step is a young man in a uniform. Remember that this is right after the war. One thing leads to another and based on the bogus information from an earlier scam the young man kills himself in front of Price.

Years later, well into the twenties, Price has dedicated himself to actual research and goes around trying to explain and debunk spiritualists. Clearly this is him doing penance for his earlier sins. When a very powerful member of parliament is caught up in a scandal involving his wife and their haunted house Price is called in to explain things away. He doesn’t want to, but immediately feels sorry for the woman and decides to try and save her. If he can’t explain her behavior and make things better, she is on her way to spending the rest of her life in a sanitarium.

I can’t say much more than what I did above without giving away spoilers and I don’t want to do that with this movie. Harry Price: Ghost Hunter is an excellent bit of fun that I’m going to recommend. The story is great and has an interesting twist by making our main character a skeptic who tries to explain everything away with science. This means that spooky things happen and we the audience question if it is real or not (cinematically speaking that is) while the protagonist is automatically dismissing it. I can’t remember a supernatural haunting movie that pits the audience against our main character in such a way and I found it a fun exercise. Is this a real haunting or is it some political intrigue attempting to sabotage the career of someone being groomed to lead the country? The story walks that tightrope nicely where it could go either way and maintains the suspense until the credits roll. Do we get any answers at the end? Do they explain it all away or is there a ghost? My answer is… sort of. And that is one of the reasons that I loved the movie.

This is one of those ghost stories (whether it is really a ghost or not!) that managed to create and maintain tension without any jump scares. The movie has so many creepy moments that it doesn’t need to toss the proverbial cat from stage left to generate interest. There are doors that slowly open and close, bells that ring when they shouldn’t, voices when there shouldn’t be any, and the always great strange sounds/knocking. I’ve said it many times when reviewing ghost stories here at the site that I love this old school stuff. My favorite is setup by a single line of dialogue… “He is standing right behind you…” Trust me when you see the scene it will send chills down your spine!

I enjoyed the heck out of Harry Price: Ghost Hunter and recommend it. This is an old school spooky tale that will satisfy fans of the classics like The Uninvited and The Haunting. In case you don’t know those movies (shame on you!) that is high praise.

© Copyright 2020 John Shatzer
Posted by Gutmunchers Lives at 9:50 AM