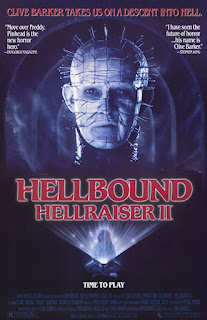 Time to dig into this first sequel in the Hellraiser franchise. Picking up right after the end of the first flick this one finds our heroine Kirsty locked up in a mental hospital as no one believes her father was killed by demons and a mattress ate her stepmother. I guess when you come right out and say it that makes some sense. While in the hospital she meets Dr. Channard who takes a particular interest in her case. He seems determined to help her but is also very creepy. Turns out he is aware of the puzzle box and wants to go for a stroll in hell. Because of his research he knows how to bring the evil stepmother, Julia, back out of the mattress by feeding it blood. This leads to the puzzle box being solved and some cenobites wreaking havoc.

All the above leads to Kirsty and her new friend Tiffany doing battle in hell with the cenobites, Julia, and the good doctor Channard, who is now a cenobite. Along the way we get some background on how Pinhead became what he is. This also leads him to find his humanity and immediately pay the price. You know I always remembered these movies having more Pinhead in them then they have so far.

I hadn’t seen this movie in a while, and I have to say it is way better than I remember it being. I might even like it more than the first! The pacing is surprisingly fast as we get a gooey flashback to the finale of the previous film and jump right into Kirsty and the crazy doctor. No slow buildup here with some experimental brain surgery and a patient that likes to cut on himself with a straight razor as early highlights. While it lags a bit when they first get to hell things pick up for an insane ending that I was very satisfied with. 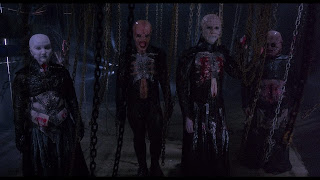 The cast is great the second time around. Ashley Laurence is perfect in the role of Kirsty and Doug Bradley shines in his limited time as Pinhead. This is also the first time in the series that we get to see him out of the makeup. For me I also liked that we get to see his human side as that makes him a far more interesting character and is the beginning of fans really embracing Pinhead as a horror icon. I get that some fans disagree with it, but sometimes I like a little bit of depth to my monsters. Though I think that most forget that the real villain of the first two movies is actually Julia, Kirsty’s stepmother. Clare Higgins is gleefully evil in the role and is a highlight of this as well as the first movie.

I’ve already mentioned a bit about the gore, but I want to speak on it just a bit more. As stated above we get an extended and horrible sequence with a mental patient seeing maggots on him, they aren’t really there, and proceeding to hack away at his own skin with the razor. This goes on for a while and the camera lingers. It is the kind of cringeworthy practical effects that I love. The skinless effect on Julia and her “shopping” for skin leads to some good stuff as well. There is the doctor getting turned into a cenobite, someone losing their heart, a room full of patients getting wiped out, and someone even gets drained of their blood on screen. This damn thing is gory as hell and I liked it.

In the past I was never a fan of the Hellraiser franchise. As I’ve gotten older I think that I’m appreciating it more and more. I’m encouraged and looking forward to checking out the rest, at least the next couple anyway. I’ve heard bad things past that. As for this one I highly recommend it.