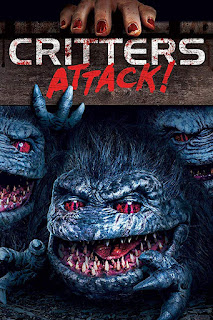 It has not been a good couple of years to be a fan of the Critters franchise. I recently checked out the series that popped up on Shudder, review here, and didn’t like it at all. At the end of the review I held out hope that someone would come along and do a proper film reboot or sequel for the franchise. Well I got my wish… sort of.

Before I start please note that this movie has nothing to do with the original franchise. It isn’t a sequel and has no connection to it other than the Critters. Don’t let Dee Wallace’s appearance fool you into thinking this is connected to the “classic” franchise. The story follows a young woman, Drea, and her brother Drake. She is trying to get into college, and he is an alien conspiracy nut. This is important because it is used as the excuse for no one believing him when he sees a spaceship crash.

The pair live with their uncle, who is also the local scruffy sheriff. This is important later in my review. Finally, we have Dee Wallace playing Aunt Dee. I guess she is a bounty hunter because she knows about the Crites and has a big gun. The Critters crash land and start eating the locals. There is also another Critter that turns out to be a good one and is there to protect the human race. We know this because she is white and well, they actually assign it a gender. Stuff happens… people die…and I was disappointed.

This movie is awful. The Critters franchise was always accused be being a Gremlins rip off and I’ve defended it against that for years. But here they went full “Gizmo” with the good Critter who loves the kids and just wants to help them. What is next? Don’t get them wet or feed them after midnight? That was a completely unnecessary plot device that misses the point of the franchise completely. These are alien invaders dropping by to snack on humanity, we don’t need good Critters! The bounty hunters filled that need in the other movies and that worked just fine.

Speaking of bounty hunters how about they explain Aunt Dee? Is she an alien shapeshifter? If not, how does she know about the Critters? Maybe she is a government agent? The movie spends way too much time on the annoying children when they had a perfectly good story to explore with Dee Wallace’s character. I don’t want to say that the child actors in Critters Attack weren’t good. It might have to do with a poorly written script that gives them nothing to do and no character arc. I’m sure if given more time the filmmakers would probably have screwed up the character of Aunt Dee as well. 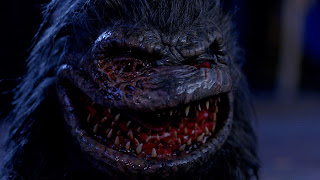 I did think that they did a decent job on the Critters. The puppetry is fine, and the creature effects work was decent. Though there are times where they clearly didn’t have a way to make them move across the scene and interact with the cast. This is obvious with the “good” Critter that spends most of the time stuffed into a backpack. And while there are many attacks, they don’t have that one kill that defines the movie like the others did. For example, when Billy Zane loses some fingers in the original. Still I’m glad this wasn’t a CGI fest so there is that.

That is the only good thing that I can say about Critters Attack. It just isn’t a good movie. Fans have waited a long time for a decent entry into this franchise and I’m afraid we might have a long time more before we get one. Sadly, I’m going to recommend skipping this one.