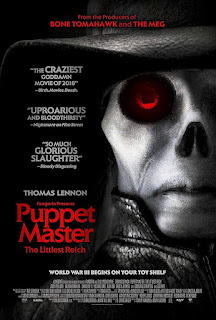 When I heard that they were making another Puppet Master movie I didn’t care. This might be blasphemous to some fans of Band’s movies, but he had pretty much driven the franchise into the ground with progressively worse sequels. Then I heard that this wasn’t going to be a Full Moon flick and that he had allowed someone else to make a Puppet Master movie (by allowed I know he got paid!) I was interested.

Things kick off with the great Udo Kier chewing up some scenery as Andre Toulon in the long-ago time of nineteen eighty-nine. There he has some interaction with a bartender and her girlfriend before making them his victims. See Toulon is a Nazi, which is a big change from the previous movies, and hates homosexuals. Well he pretty much hates everyone… he is a Nazi so there aren’t many people he doesn’t want to kill. His homicidal shenanigans get the attention of the local police and they bust into his mansion guns blazing.

Things then move forward in time to the present day. Edgar is moving home after a divorce, which doesn’t make his family very happy. While there he finds a Blade Doll in his dead brother’s bedroom and figures out it is worth some money. So, he heads off with his new girlfriend and boss to a convention commemorating the thirtieth anniversary of the Toulon murders to auction it off. They arrive just in time for the puppets to reanimate and start a murder spree. It seems that Toulon is getting some life force from these kills his puppets commit allowing him to reanimate himself. All of this leads to Edgar and his girlfriend, Ashley, having a final showdown with the living corpse of Toulon. 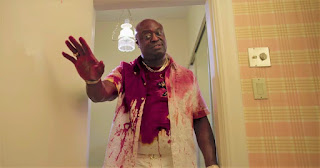 I don’t care what any of the mainstream critics think of Puppet Master: The Littlest Reich this movie is awesome. Things kick off with Udo Kier being creepy as hell in an example of how “stunt” casting should work. Instead of a sticking a familiar actor in your movie just to show you could, here they gave the man something to do. Not only that but they put him in makeup and let him be the creepiest version of himself. That was awesome and was followed up with the first kill of the movie. Right from the start I knew that this was going to be an entertaining ride.

The main characters are introduced after the credits and are fun to watch. Thomas Lennon does an excellent job playing Edgar as a possibly depressed and always sarcastic human being. There is real chemistry between he and Jenny Pellicer who plays Ashley. This is the central relationship in the movie and makes the non-puppet parts enjoyable. I’d also be remiss if I didn’t say something about Nelson Franklin as Markowitz, Edgar’s boss and friend. I never expected a good story and cast in a Puppet Master movie.

Have no fear though this one isn’t all dialogue and acting. There is a lot of blood spilled in this movie and it is all practical effects work. Let that sink in for a moment. This is all latex, fake blood, and honest to God puppets moving around the screen. The kills are plentiful and well executed. A head gets lopped off and another crushed like a grape thanks to Pinhead. A Jewish couple is torched, and another stabbed to death during sexy times! Intestines are pulled across the floor, eyes stabbed out, a chopper puppet makes like a lawnmower on some people and we even get an arm ripped off. But the best kill of all involves a pregnant lady that you have to see to believe. These are only a few of the kills in what has to be one of the bloodiest flicks I’ve ever seen in a very long time. Again, this was all practical effects work! I was in bloody horror nerd heaven.

I haven’t even mentioned some of the insane dialogue or funny situations that the movie gives us, the viewer, to chew on. I’ve already watched this one twice and I never do that with new horror movies. Puppet Master: The Littlest Reich is without a doubt a must see for fans of the horror genre and especially fans of Full Moon/Charles Band. They took his creation and dialed it up to an eleven. I highly recommend this one.

Posted by Gutmunchers Lives at 9:12 AM