note: I wrote this for the Grindhouse Purgatory issue dedicated to Al Adamson. I'm not a big fan of his but I've always dug Five Bloody Graves and was happy to cover it for the issue.

How is everyone doing? Here I sit putting the finishing touches on my article for the latest issue of Grindhouse Purgatory quarantined in my house. We are living in a strange world my friends. I had kidded that sitting at home on the couch watching movies was something that I had been training for my entire life. It was fun for a week or two, but then I got bored. Thankfully, I have this article and a few other projects to keep me occupied while I wait for the world to get back to some sort of normalcy. Hell, maybe by the time you are reading this we are all hanging out again and talking movies. Enough with all of this depressing shit lets dive into some Al Adamson Western goodness 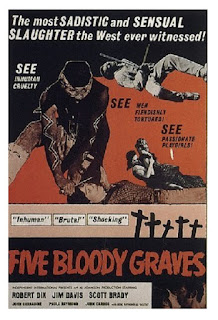 When Pete told me that the next issue of the magazine was going to be a tribute to Al Adamson I sort of panicked. While I love cheesy low budget movies, I’ve always felt like many of Adamson’s flicks were boring and not at all fun. Sure, I dig Satan’s Sadists and Angel’s Wild Women, but those were already spoken for. Then I remembered Five Bloody Graves and did a little jig. While I haven’t seen it in years, I did think that I enjoyed the movie so after asking to make sure it was available, obviously it was, I went looking for a copy to review. There is a surprising amount of options, but I decided to watch a beat-up print complete with scratches and pops. It just seemed right.

Before I get to talking about the movie, I suppose I should give a bit more explanation when I say that I find Adamson’s work boring and not fun. To begin with let me stress that I have watched all of his movies. I’m a big drive-in nerd and love bad movies. Hell Ted V. Mikels is one of my favorite directors, so I’m not unrealistic when it comes to independent movies from the ‘60s and ‘70s. When I watch an Adamson flick it doesn’t seem like there is a complete script as characters seem to do random actions that don’t always make sense. There is also normally a ton of padding which makes for a tedious viewing experience. I’ve seriously used his movies to help me fall asleep during bouts of insomnia. I’m not being a smart ass about this it’s the truth. There are some exceptions like those I’ve mentioned above, but they normally are helped along by a great cast having fun. But this one is different in that it has maybe the most unique and best story that Adamson ever shot. Now that you know where I’m coming from let’s get to talking about Five Bloody Graves.

Ben Thompson, played by drive-in legend Robert Dix, is riding back from somewhere when he starts to meet up with people. One is an old flame, another is a half-breed Indian that he is friendly with, and yet more are a group of stranded travelers stuck when their wagon rolled over and the horses ran off. The connection between all of these characters, other than Thompson, is that they are all being menaced by some Indians that have gone on the warpath. Toss in some gun runners that have been providing the means for the Indians to stir up trouble and we have our characters.

After watching some bad things happen eventually all the characters end up together and have to fight their way out of the territory they are in while being harassed and picked off along the way. If the Indians trying to kill them isn’t bad enough you also get some internal conflict as most of the characters are flawed and turn on each other. By flawed I mean cranky and downright abusive. Between the ambushes and bickering most are lost on the way. I can’t say more without explaining a very important plot device.

The story of Five Bloody Graves is an interesting one that is surprisingly complex and filled with action. Almost immediately we get this strange narrator talking directly to the audience about Thompson and his history. How he lost his wife to a bullet that had been intended for him and how he had been seeking out death since then. But he couldn’t die because he was a servant of death and that death wasn’t done with him yet. Then you start to figure out and eventually are told that our narrator is death and that he is explaining why things are happening. So basically, the idea is that everyone who Thompson meets up with either dies by his hand or gets caught up in the violence surrounding him. This is best summed up by one of the last lines in the movie, “…there can be but one victor and that is death…”. This is kind of deep.

Referring back to what I had mentioned above I was a bit concerned when I started watching this one because it starts off with that feeling of random characters and action scenes not really fitting together. It seems like Dix’s character is just going to ride around stumbling over one fight to another for the duration. For a good half an hour that is what happens, but this is actually just introducing the characters and setting up the rest of the story. Once they all meet up what felt like disconnected plot lines suddenly click together. At that point all of the stuff that was set up gets resolved and we find out more about Thompson and his connection to death. I had forgotten the details in the years since I last watched Five Bloody Graves and found myself really getting into and enjoying it as the narrative progressed. The pacing is wonderful with a lot of shootouts and fighting to keep things interesting and moving along briskly.

Speaking of the shootouts and fighting the stunt work is top notch. You get a lot of gun play with actors that clearly know their way around firearms. Many of the cast members had a long history working on Westerns, more on that later, and it shows. Nothing can kill a flick more than seeing people who are clearly not comfortable with guns trying to act as if they have lived their lives with one strapped to their hip. Same goes for riding horses, which again this cast is total comfortable with. This includes a lot of trick riding, especially falls. The fight choreography is very good as the fights feel real and there aren’t the awkward pauses that you sometimes get in low budget flicks. Considering that John ‘Bud’ Cardos helped with the stunts as well as starring in one of the roles that shouldn’t be a surprise.

I’ve already mentioned Robert Dix but that isn’t the only familiar face you get to see. Scott Brady, veteran of many drive-in favorites as well as a frequent guest star on television shows sinks his teeth into an abusive pimp traveling with his “girls”. Jim Davis, another veteran of television as well as a ton of Westerns, gets to play a gun running rapist that gets what is coming to him. John ‘Bud’ Cardos is Joe Lightfoot, the half-breed Indian and sort of side kick to Thompson. It doesn’t end well for him. Best of all is John Carradine in the most John Carradine of characters the cranky old preacher Boone Hawkins. Seriously guys there is a lot of “A” list drive-in talent in this movie.

One more thing that I wanted to mention that I found amusing. I had just covered Beyond Atlantis for the Sid Haig tribute issue and was shocked when I heard some familiar music at the opening of Five Bloody Graves. Now this isn’t the first time that I had that happen to me where someone used the same music library to score their flick (Night of the Living Dead and Teenagers from Outer Space come to mind) but it was weird that it happened in back to back movies I was covering for Grindhouse Purgatory. Plus, I’m such a huge nerd that immediately after the end credits rolled on Adamson’s flick I had to pop in my Blu-Ray of Beyond Atlantis.

Honestly, I found this movie to be very entertaining and highly recommend that people check it out. My opinion about Al Adamson’s work in general hasn’t changed. I’m still not a fan of most of it. But I think that it is important, especially in this day and age when everyone is looking to get offended, that you all understand something. I’m not saying that his work has no value. Adamson has a lot of fans and if you are one of them then good for you. There are plenty of filmmakers and movies that I love, and other people hate. The majority of his stuff just doesn’t appeal to me.

Well I suppose this is all I have to say about Five Bloody Graves. As always you can email me with any questions or comments. I’m even willing to debate the value of Adamson’s work with anyone out there. I’d love to hear from you regardless of whether we agree or not. That email address is gutmunchers@gmail.com. Until next time stay safe and keep watching the classics. Thanks, as always, to 42nd Street Pete for letting me write for such a cool magazine. Don’t forget to support him by buying back issues and check out his Gunslinger books. They kick much ass!

Posted by Gutmunchers Lives at 9:29 AM