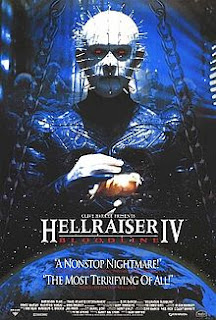 Well friends here I am continuing my deep dive into the Hellraiser franchise. As I stated in my review of Hellraiser III: Hell on Earth, I never went any further with these movies. From here on out it is all new to me, which should be fun. Right? I mean how bad could things get? Really, I’m worried now…

I guess with the fourth installment the filmmakers decided to try and explain the puzzle box and the cenobites and hellscape contained within it. The movie starts in the future when we are introduced to Dr. Merchant. It seems that the good doctor has hijacked the space station he designed to experiment on a very familiar box. The army/space cops show up in time to stop him… sort of. While being interrogated we get to find out that his family has done battle with the box and demons from its very inception. This is because the distant ancestor was the toymaker that made the box.

We get two flashbacks. The first tells us about the toymaker and the crazed wizard that commissioned the box. After delivering the box the toymaker sticks around and is horrified to see the ritual that allows it to open the doorway to the Hell allowing a princess from hell, Angelique to enter our world. He tries to destroy the box and send her back to hell, but obviously fails. Then things jump to another ancestor in the nineties that has built a building based on some drawings he inherited from the toymaker. Plus, there is some nonsense about the bloodline having memories and passing them down. Here we get to meet Pinhead for the first time as he pops out and has a bit of a disagreement with Angelique about her methods. She uses seduction to get what she wants and well you guys probably know how Pinhead solves his problems. This leads to some conflict and eventually she goes full cenobite.

After the second flashback we bounce back to the future and watch an abbreviated fight between the space cops, Pinhead, and some of his new friends. Luckily throughout the other stories there was this MacGuffin of a new box that would destroy the minions of hell and their portal. With some very bad CGI we get to see how that works and the good guys ride off in a shuttle.

My first observation about Hellraiser IV is that it was directed by Alan Smithee. If you aren’t in the know on this sort of thing that is the named used when the director of the project wishes to have his name removed from the finished movie. The director’s actual name is Kevin Yagher and he directed such illustrious movies as… well nothing. He did this and a couple of Tales from the Crypt episodes. He would rather have no feature film credits on his resume than admit he directed Hellraiser IV. Let that sink in.

If that tidbit didn’t give it away this movie is a complete mess. In some ways it feels way too ambitious in both the epic story that is trying to be told as well as the limited budget that they had available to them. Let me speak to the story first. There are basically three distinct plots in the movie. You have the original toymaker fighting against Angelique and those that summoned her. Trying to set right what he had unintentionally done by making the box for them. He consults a random science guy who is doing an autopsy. Who is this character and why would he have any advice on what to do? That’s never explained, hell I don’t think he even gets a name. The toymaker goes back and gets caught, it is hinted that something happens to his “exquisite” fingers, but we never see it. Was something cut out of the movie? If so, why leave the dialogue referencing it in?

This happens again in the second story as there seems to be a lot more to the relationship between Pinhead and Angelique then what we get to see on screen. There are bits that hint at a rivalry as well as an attraction between the two, but it is never fleshed out on screen. Even her ending where she tries to betray him, and he turns her into another cenobite seems to have had been written with something more behind it then what we get. Again, it feels like something is missing.

The wraparound with the marines is abbreviated and forced. It is all action and itself feels tacked on just to resolve things as they reached the end of the runtime and budget. I’ll have more on budget later. There is a horrendous bit of editing at the end where Dr. Merchant goes from running down a hallway to calmly talking to Pinhead, to us then finding out that it was a hologram and that he is really in a shuttle flying away from the space station with the character that we just saw him talking to earlier before they go their separate ways. This might seem redundant me mentioning this again at this point, but something is clearly missing.

Speaking of the budget there is a dramatic difference between some of the effects work. At times we get some decent practical effects work with bodies being skinned, hooks piercing flesh, and hearts getting ripped out of chests. Good stuff indeed. But then we suddenly get terrible CGI work. This is most noticeable with the space station that is clearly some crappy computer-generated model that they can “fold” up in the software to make another cube. There is also a gag where a pair of twins get formed into a new cenobite that is cringeworthy, even by mid-nineties digital standards. Much like the plot this is an odd mix of stuff that just doesn’t seem to belong in the same movie.

I’m going to stretch that idea of not belonging into my final point. This is the fourth movie and it travels in time. I don’t think that it is too unreasonable for them to somehow tie the characters from the first three flicks into this greater story arc. They don’t and in fact it doesn’t make any sense why any of those characters would have come across the cube since there seems to have always been a Merchant descendant available to “finish” the job and open the larger gateway to hell. It actually feels as if the previous, and much better movies, were just times where Pinhead was bored… That sucks.

Hellraiser IV Bloodline is a terrible movie that I am glad I skipped until now. I’ve never been a big fan of this franchise but even I think that it deserves better than this. I can’t see how the sequels could get any worse than this, but I’ve heard things. Clearly, I’m not recommending this one and I ask that you wish me luck as I dig deeper into the mess that is this franchise. Though I need to take a break so it may be a while.

Posted by Gutmunchers Lives at 1:24 PM