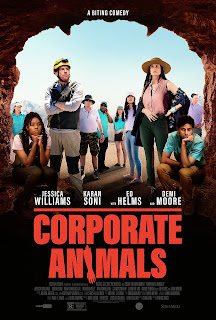 I do love a dark comedy and Corporate Animals is certainly that. Demi Moore plays the CEO of a company that is best known for its beauty products and edible cutlery. Because plastic is bad and it is better if you can eat your fork after eating your lunch! She has taken her employees on a team building exercise to build team spirit. When faced with a choice between choosing the easy trail or the advanced one she chooses the harder of the pair. That means they end up in a cave where an earthquake traps them and squishes their guide Brandon, played by Ed Helms.

While they are trapped some dirty laundry comes out about company, the boss (Moore’s character), and people start to hook up/crack under the pressure. To survive they realize that they have to eat Brandon. This leads to references to James Franco and the Soccer team trapped on the mountain. After a short debate they go at it and the next time we see them he is bones, and they are stuffed. We also get some of them trying a different tunnel that leads them to some trippy salamanders. Basically, shit gets weird until there is a fight and the boss ends up bleeding on the ground. Right about then they hear the rescuers coming but she insists as she is lying on the ground that she is going to rat them out and her attacker is going to jail. What can they do? Well as we have heard several times already, “Teamwork makes the dream work!”.

When I saw this pop up on Shudder, I wasn’t sure what it was. Thought I’m a fan of Ed Helms and Demi Moore is always entertaining so I gave it a shot. This is a very funny movie, though it might not be everyone’s cup of tea. Things start off rather predictably with Moore playing her character as a woke and inclusive to the point of being annoying boss. She is pandering to what she thinks everyone wants her to be, but clearly underneath is as mercenary as the next corporate big wig. I’ve seen this kind of thing before, so I was sort of meh. But then she gets a bit racist, which I didn’t see coming. There is also the whole going cannibal early thing and neglecting to tell them she screwed up the paperwork so the rescuers she promised aren't coming. She plays the character wonderfully and reminded me that she has some comedic chops. 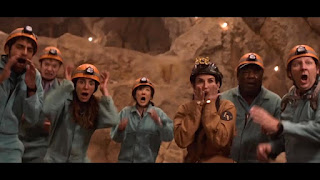 The rest of the cast is also great as they realize their world view has been twisted by the environment fostered by the corporate culture they have bought into. Watching them turn against that and find a different path is nifty and of course this being a dark comedy is punctuated by the earlier “Teamwork makes the dream work!” reference. I’m not going to spoil it because it is a great payoff. Oh, and the press conference scene is a blast as well. Given that this movie basically takes place in one location they had to have a clever story with a lot of subtext as well as some actors that have the screen presence to carry things. They nailed it.

Toss in a gnarly looking infected wound singing Britney Spears songs, some full-frontal male nudity, cannibal humor, some trippy animation, and of course lots of blood/gooey bits for a good time. Comedy can be very subjective and what one person thinks is hilarious is dumb to another. But I found Corporate Animals to be a blast and recommend that everyone gives it a chance. It might not be what you expect from Shudder, but I dig that they did something a bit different.

Posted by Gutmunchers Lives at 11:20 AM