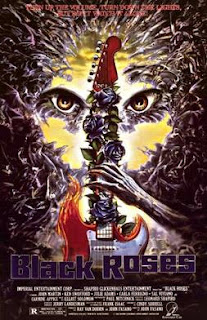 This is one of those rare eighties flicks that I’ve never seen before. With as much as I lurked in the aisles of the video store and as cool as the cover of the VHS was, I never rented it. I figured it was about time to check this out, especially since it popped up on Shudder. Plus, the late Paul Kelman of My Bloody Valentine fame has a small part so I had to watch it!

The plot revolves around a band called Black Roses. They blow into a small town to play a few warm up shows before going on tour. The local parents aren’t too pleased with the devil music, aka. hair metal and try to stop the band from playing. But when they go see the first show, they are shocked that it is fairly harmless. That is until they all leave and the band turns into leather clad troublemakers. As the teenagers keep going back to see the band they get more disinterested in school and responsibilities. Eventually they get violent as well as obnoxious. Only their English teacher knows that something is up and goes to stop the band by “sneaking” into the concert and setting the band on fire. Which is odd because by then they are all demons, and you would think fire wouldn’t be a big deal.

I’m not sad that I never bothered to rent Black Roses. I have many issues with it but the biggest on is that despite some interesting ideas the movie is boring. The band blows into town and before anything interesting happens we get multiple classroom scenes with the English teacher. That is followed by parents talking about the devil music, some teacher student bonding, and listening of records. That last one wasn’t too bad as the music is surprisingly good with a decent hair metal soundtrack. Then again I’m a big hair band guy so I might be a bit biased. This is also one of those movies that is cursed with the dreaded “thirty-year-old teenagers” trope. Honestly can’t you cast younger looking actors as high school students? 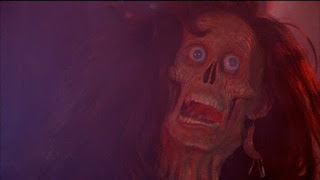 When we finally get to what should be the good stuff (aka. the kills/creatures) it is staged in a manner that isn’t interesting or engaging. A guy backs over his mom… offscreen, another shoots his father… also offscreen. The best gag in the movie has a familiar face for Sopranos fans getting pulled thru a wall by a monster that I think came out of a record. I have to admit that there are some decent creatures in Black Roses. The demonic version of the band is pretty good, though it doesn’t get enough screen time. There is a demonic Julie puppet that is fun as well. But then that is offset by some terrible rubber masks as the audience inexplicably turns into zombies never to be seen or mentioned again. Also, other then a nifty throat slash the kills are lame. In addition to what I’ve already talked about we get an ashtray to the noggin’ and a guidance counsellor tossed out a window. I expected more from an eighties horror flick.

This is such a disappointment and not a movie that I will ever revisit. If you want to watch a rock-n-roll horror flick then check out Trick or Treat, or even Rock-n-Roll Nightmare. They are better then this mess.