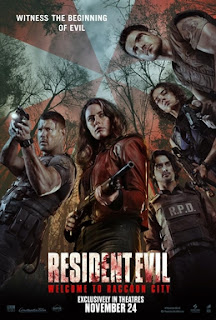 The history of these Resident Evil movies have been a mixed bag. Most of them aren’t very good and feel at best like you are watching a dumbed down version of the video game. While I’m not as critical as some others I’ll agree that there are some stinkers in the franchise. I should also mention that I’ve never been a huge fan of the video game series, so I don’t have that love for the characters or the connection to them. Still, I’m always down for some zombie action so when this reboot of the franchise showed up at my local big box store I figured I’d give it a chance.

We have three story lines that end up crossing with each other by the end of the movie. First there is a woman named Claire returning to Raccoon City to see her brother. He is a police officer and isn’t terribly happy to see her. They have some history as orphans growing up in a facility run by a creepy doctor who worked for the Umbrella corporation. We also have a group of cops, sort of like a S.W.A.T. team, that are sent to a mansion to check up on a patrol that isn’t answering their radio calls. Finally, there is a slightly incompetent cop named Leon who has been banished to Raccoon City because of an accident during his training. All of them are in town when an alarm goes off warning the citizens to stay in their homes. Sadly, most of the locals are already infected with a virus that turns them into monsters that our survivors have to deal with. 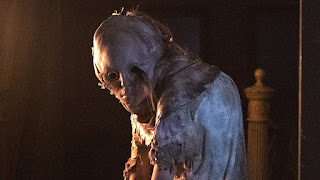 First question is are these supposed to be zombies? I think that eventually they turn into them, though it starts off like an infected flick. I guess that isn’t terribly important to most viewers but being a zombie purist, it annoyed me a bit. The virus also turns some people into monsters when they die so that is confusing as well. I’m not sure that this is a zombie movie at all. That said it is a decent monster movie. The action takes it’s time ramping up while we get to meet the characters. Again, I’m coming at this as someone who hasn’t really played the games, so it was cool understanding who everyone was and how they were connected to each other. That said when the action kicks in it was nonstop and fun. Overall, I found the pacing to be even and the story to be engaging. It is my understanding that they sort of cover the plot of the first two games with this movie and it works very well. The zombies/monsters look decent. There are a lot of zombies, and they are quite gooey in spots. Though I found the monsters to be less fun. There is one that is mostly CGI, and it looks okay, but compared to the practical makeup effects it isn’t great. The kills aren’t as explicit as they could have been and that was also a bummer. No gut munching or limbs flying in this one. I would have enjoyed a bit more gore out of the movie, but I think they leaned into the action instead. They do a very good job with that so I can’t be too disappointed.

The cast is solid, and we have a couple familiar faces pop up. Though I was most excited to see Nathan Dales in a blink and you will miss it role as a helicopter pilot. I’m a huge Letterkenny fan so that put a giant smile on my face. Neal McDonough, Donal Logue, and Tom Hopper of The Umbrella Academy fame also appear. A good cast combined with a solid script make for an entertaining monster movie.

I’m going to recommend Resident Evil: Welcome to Raccoon City even if you aren’t a fan of the games. The movie has plenty of action, some monsters, and lots of bullets being sprayed about. Turn off your brain and kick back for some fun.