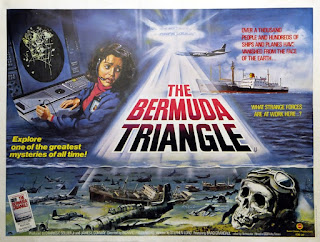 Time for another of these awesome documentaries from the seventies. Last time I checked out Mysterious Monsters, this time it is The Bermuda Triangle. The movie is another production from Sunn Classics and is produced by Chuck Sellier, best known as director of Silent Night Deadly Night. I’ve already covered The Mysterious Monsters here if you are interested in more cheesy goodness. Now onto the review.

First let me get something out of the way. This documentary was based on the best-selling book from Charles Berlitz. In the years since they first came out much of what he cited as evidence of paranormal activity has been debunked. He also has been criticized for ignoring the most obvious and scientific explanation for phenomenon and substituting crazy supernatural stuff as the most “likely” cause. Spoilers I love stuff like this, but don’t take it seriously. When I was a kid, I was obsessed but I know that this is mostly all nonsense that has been disproven. I watch this for entertainment purposes only.

Things kick off with a narrator who looks knowledgeable and trustworthy. He explains about the triangle and its long history of strange phenomenon and disappearances. He beings telling stories, which play out on screen with reenactments. First up is Columbus encountering UFOs and a spinning compass. Never read that in the history books. We then see a derelict ship with skeletal bodies appear and disappear in a storm. There is even a flying dutchman story, complete with a future king of England seeing it!

You think that is spooky. Wait until they get to Flight Nineteen. I’m sure if you know anything about the Triangle this story is familiar to you. It has been gone over again and again in much more detail by other documentaries since this one. Shortly after World War II a training flight out of Miami disappeared into the Triangle. This reenactment takes up a bit of the movie and feels a bit padded. They also claim that the flight was fully manned which is something that I’ve only ever seen Berlitz claim.

Here is where things get fun. We are hit rapid fire with some theories to explain boats and ships disappearing without a trace. One is unexploded mines and bombs from a couple world wars. Another has to do with blue holes and whirlpools. We also get underwater earthquakes, tidal waves, and waterspouts. These are all verifiable natural occurrences that have been seen in the Triangle before. But since they don’t explain every disappearance, we get another more “plausible” theory. Atlantis! Maybe there is ancient Atlantean technology that either has a death beam or maybe causes time vortexes. And if that doesn’t work for you the only other logical explanation is ALIENS!

Seriously I love how cheesy this one is. If Atlantis and Aliens aren’t enough fun we also get some conspiracies too. Charles Wakely who experienced a weird encounter in the triangle and spent the rest of his life digging into it, until he was shot! We also get the story of M.K. Jessup who called a friend and fellow researcher to arrange an impromptu meeting due to a big break in the case of the Philadelphia Experiment. Berlitz ties this to the Triangle because Aliens clearly use the same technology… Anyway, Jessup is found dead in his car of an apparent suicide. The documentary leaves you hanging as to who killed him since it was clearly a setup. They neglect to mention that his books had stopped selling, his latest was rejected by the publisher, and his wife left him. These little omissions are why people question Berlitz’s work.

I will freely admit that much of my enjoyment of this documentary comes from nostalgia. I saw it as a kid, was fascinated by all sorts of spooky stuff like this and remember it fondly. While not as good or nearly as fun as Mysterious Monsters (Peter Graves rules!) I can still recommend The Bermuda Triangle if you are willing and able to turn off the critical thinking part of your brain and watch it for entertainment value.