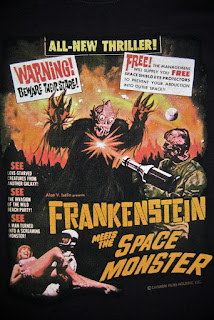 Colonel Frank is about to be shot into space on a dangerous mission. What the public doesn’t know is that he is a machine made up with body parts and an electronic brain. While he is being launched into space some Martians arrive and think that the ship is a rocket being shot at them! They in turn cause it to crash but realize that it wasn’t a weapon and contained a passenger, so they land near where it crashed. They want to capture the astronaut so he can’t let anyone know there are in orbit. They are on a secret mission to capture human women to repopulate their planet after “winning” a nuclear war killed all the females but their princess.

Dr. Steel, played by James Karen in what I think is his first movie role, and his assistant head off to the crash site as well hoping to find and repair Frank who was damaged in the crash. This brings them into conflict with the Martians, but lucky for them the damaged Frank is able to fight them as well as the monster they brought along in a cage. Makes sense, right? Of course it doesn’t… this is an awful movie!

I hope you like stock footage because according to IMDB this movie is about sixty five percent stock footage. We see rockets launch, fighters flying, army troops deploying, and lots of jeeps. Frankenstein meets the Spacemonster is one of the craziest examples of a movie that is padded out with this kind of footage to cover their lack of budget as well as the lack of plot. Characters enter and exit the story without explanation. We do see a couple of recognizable actors in the previously mentioned James Karen and veteran character actor Bruce Glove, but neither of them is going to put this on their resume. They are clearly struggling with the material if you can even call it that. The remainder of the cast is utterly forgettable and at times annoying.

Based on the sets and makeup that is original it seems that they had very little money. The Martians, who by the way in the movie are never called that but are in the promotional material, are brought to screen with a series of terrible skull caps with visible lines where the makeup isn’t blended in. Those are the ones you get to see without their space helmets. The rest of the crew is clearly just actors in jumpsuits and generic space helmets. The creatures are okay. Frank is decent and the full rubber spacemonster put a smile on my face. Sadly, the interior and exterior of the spaceship is terrible. Also, unless this son of a bitch is a Tardis the scale doesn’t match at all! Damn did I just get too nerdy?

What else do I want to mention? We have overly dramatic musical cues combined with a generic soundtrack to make Frankenstein meets the Spacemonster as boring audibly as it is visually. There are phone calls made with rotary phones that clearly aren’t attached to anything. With the previously mentioned massive amounts of stock footage this movie manages to be bad without any of the charm that can come from being so awful. I recommend skipping this turkey.

Posted by Gutmunchers Lives at 1:58 PM