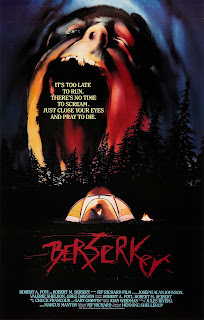 My never-ending search for slasher movies continues with this oddity. I had never heard of Berserker before, but the idea of a Viking warrior killing folks off in the woods seemed like a fun idea. I tracked myself down a copy and popped it in.

The story starts in the tenth century as a Viking Ship arrives on a beach and off jumps the Berserker. He growls and flexes a bit before the credits start. After that the movie moves to “now” circa nineteen eighty-seven with an older couple camping in the woods. Some stuff happens and they get lost in the woods. Something attacks them and they are quickly killed. Then we move onto our main characters. Three guys, Mike, Josh, and Larry as well as their ladies Kathy, Shelly, and Kristi are all going camping. At the same campground in Rainbow Valley as we just saw people murdered!

The rest of the movie is standard. Josh is a jerk and is nasty to Pappy Nyquist who owns the campground. This leads to them staying at the wrong place. You have a randy couple, Shelly and Mike, who go off in the woods to give us the requisite nudity and naughty grown up activity that you expect in a slasher flick. There is also the sheriff who may or may not be looking to hassle the kids. Much beer and pot are consumed… or at least talked about. In the end there are bodies in the woods and the killer is revealed.

Be warned that I’m going to end up giving away the big twist. If you aren’t cool with that skip to the last paragraph of this review to see my final thoughts and recommendations. Now that you have been warned here we go. My biggest issue with Berserker is the pacing. Other then the old couple right after the credits nothing much happens for the first forty minutes of the hour and a half runtime. There are a lot of shots of ATV riding, swimming, arguing, and other such shenanigans. After this montage of nonsense, the music stops and suddenly we see it is night and they are sitting around a campfire talking. Not terribly interesting. 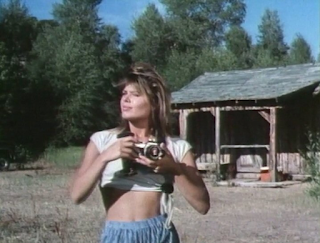 Once things get rolling it does get better. Our randy couple go off into the woods for some nookie, which is cut into the first big kill when another girl is torn apart by the Berserker. That was an odd choice, but it works well. I also thought the fact that they kept cutting to an actual bear was an odd choice since the killer is supposed to be a man in a bear pelt. That said there is a great payoff to this when the bear accidentally saves the day! Then we get a fun twist where the Berserker was Pappy Nyquist who was possessed by his ancestor. They mention this is part of the legend in the first half of the movie. I do enjoy a good payoff.

The kills are disappointing. We only get five and most of them are generic face slashes with a bear’s claw that cut away before there is anything gory or fun. The deaths of Shelly and Kristi are a bit more in your face as the camera lingers on the attack as well as the aftermath. Still there isn’t much here to talk about. The look of the killer is okay, but they don’t give him much screen time. That is a choice as they keep you guessing if it is just a bear by constantly showing it before or after attacks. But again, that is all a misdirection as the killer does show up in his pelt and improvised claw weapon.

There are things about Berserker that I liked and some that I didn’t. The pacing killed the first half of the movie, but things do pick up. The kills are lame, but the twist is a cool and one that I’ve not seen in a slasher before. I’m torn as to whether I should recommend this one. I guess if you manage your expectations then you should check it out.