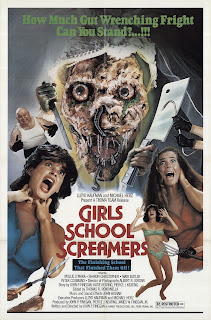 Here is another example of the old bait and switch. Someone finds a movie, this time around it was Troma, shoots some gore and sells it as a slasher flick. Still, I was interested because it was a haunted house story turned into a body count movie with extra gore inserts shot by Lloyd Kauffman himself. Let’s see what we have here.

Things start off with a kid named Tyler sneaking into a haunted house on a dare. He sees a ghost lady who calls out to him, and he runs away screaming. He ends up in a hospital in a sort of waking coma. Then we meet a group of girls from a nearby catholic school who are going to that same house to clean it up and inventory the contents. Seems the weird old guy who lived there had willed it all to them. What do a bunch of schoolgirls do in a haunted house? They have a séance which goes horribly wrong! This kicks off a sequence of events told in flashbacks where they see a girl from their school died in the house years earlier. Not only that but one of the girls, Jackie, looks just like the dead girl. Some creepy stuff happens with an uncle and the ghost of the dead girl gets some payback.

Girls School Screamers isn’t a very good movie. The pacing is off with long stretches of nothing much happening. We get exciting cleaning montages, hide and go seek montages, and newspaper researching. Thrilling stuff my friends. No one dies until the forty-five-minute mark! The last half hour or so is kind of decent. There are a few creepy moments where they are sneaking around in the dark. The kills are okay, and I did like some of the makeup. Though when we see who the killer is and how the story is resolved it is disappointing. I won’t spoil it in case you really want to watch this one but keep your expectations low.

There are seven total kills in the movie. There are deaths by drowning and meat hook that happen off screen. Someone else gets run over by a car, there is a cleaver to the face, and a gnarly electrocution. Though the best is probably the pitchfork to the torso. I think that most of this is what Kauffman added as it is in closeup, and we don’t see the actors only their reactions. All but one actress was long gone by the time they punched up the gore. What amused me is that they clearly changed around at least one of the kills because there is a scene where the victims are lined up for a wedding and the “body” doesn’t match what we saw happen. In addition to the kills, we also have a wormy hand, some eye gouging, and a very gooey ghost lady. So there is some decent budget makeup that I appreciate.

This is not a great movie, but I’ve seen much worse. If you are looking for something different that still has that eighties vibe, then maybe check out Girls School Screamers. Just manage your expectations.