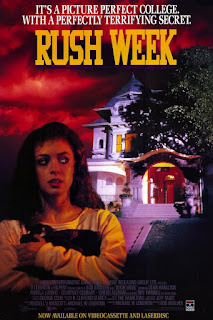 Toni is new student at Tambers College, specifically she is an aspiring journalist. She is assigned the job of reporting about Greek Week and from that ends up getting involved with the leader of a notorious Fraternity, Beta Delta Beta. His name is Jeff, and he is a bit moody at times, but he seems to genuinely like Toni. There are some unexplained disappearances of a few female students, which we the viewer know are the result of a mysterious killer chasing them down and doing away with them with a ceremonial axe. An axe that looks just like the one that Jeff and his friends use for the Beta Delta Beta hazing rituals!

Is Jeff or one of his friends the killer? Does the fact that Jeff’s previous girlfriend was murdered, and the killer never caught tie into things. What about the creepy cook at the dining hall that moonlights as a photographer using the science hall to take naughty pictures of some of the coeds? There are a lot of red herrings in Rush Week so have fun figuring it out before the end. When we do get there things make sense and despite the bodies lying across campus it seems that everyone is back to their normal partying shenanigans.

I’d not seen Rush Week before and wasn’t sure what I was getting myself into. It is rather late to the game and that normally means it is a last gasp to cash in on the dying slasher genre. Here I think that the filmmakers realized that and tried to mix things up. We do check some of the expected boxes with ample nudity and kills. But the gore is lacking, and the kills unevenly spread out. The story plays out more like a murder mystery as we follow Toni around as she unravels secrets and checks on suspects. They do a great job of doling out the facts to the audience in a way that makes you feel like you are solving it yourself. Though I did figure out who the killer was early on and was proven right. That is the risk you run with this sort of thing, though it was still a good time. 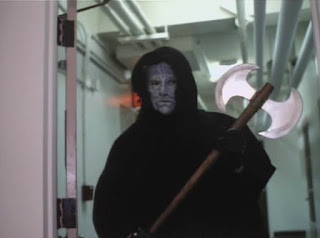 Like I said the gore is lacking. We get five kills, three of which are offscreen and implied. We don’t see the bodies after the fact so until you get to the wrap up at the end you aren’t even sure if they were really dead. The last couple kills are the best with an axe to the chest and a beheading. Neither are anything new, but it was nice to see some mayhem on screen. Speaking of nice things to see I do want to mention that Dominic Brescia from Friday V and Evil Laugh has a small part in Rush Week. It is always nice to see a familiar face when watching a movie for the first time.

One last thing that I wanted to mention was the soundtrack. Normally I’m not a nerd for that sort of thing but if you dig punk then this is going to put a smile on your face. We get legit bands like Devil, The Surf Punks, The Dickies, and The Dead Milkmen! And I’m not talking about “B” sides either, but there are some recognizable stone-cold classics. I never expect that sort of thing when watching a lower budget horror flick, so I had to point it out.

In the end I can’t say that Rush Week is much of a slasher movie, if one at all. But there is something cool here to watch and I’m going to recommend it. Oh, and if you get the chance to watch it on VHS like I did for my review do so. This only adds to the late eighties vibe and is the sort of thing best enjoyed in glorious analog!