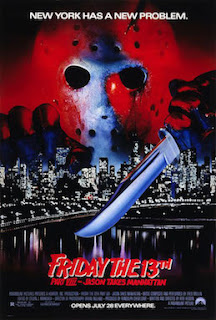 Honestly, I’ve not been looking forward to this one. The last few Friday movies before Jason X I don’t remember fondly. But since I’m a completist and I’m also running out of things to cover for the slasher movie marathon I guess it was about time to tackle this turkey. I watched my new Blu-Ray of the movie from the box set that was released a couple of years ago.

This brings me to my first issue with the movie. How the hell does Jason manage to navigate the river and take the ship to sea? More importantly why would he do that?  Luckily it just so happens that he passes a large party ship that is filled with high school graduates from the high school near Crystal Lake. So, he hitches a ride with them and then starts killing everyone he finds. Jason on a boat isn’t cool. But I’ll get to that later. In between character development, aka. these are all annoying kids and adults that we have seen before, Jason murders a few here and there. Finally, Jason sinks the ship… you heard that correctly he sinks the damn ship! Why? I guess he got tired of stabbing people.

Now we get to New York City. It appears that our survivors paddle their life raft for a couple of days to finally arrive in the city. They manage to land in the crappiest neighborhood and get mugged right away! Here what is supposed to be our female lead character, Reenie, is hauled off by the muggers to be raped and drugged. Luckily Jason shows up and kills everyone… except her of course. So, I guess that Jason doggie paddled to the city after the ship sank? Anyway, he is still wanting to kill the kids, but stops long enough to scare some punks. Why didn’t he kill them? The only excuse I can see is that he had too many targets sort of murder sensory overload I guess. Eventually Jason chases Rennie into the sewers and is caught in the nightly flood of toxic waste because that is a thing. This doesn’t kill him so much as turn him into an adolescent. Yeah, Jason is a kid now? The end. 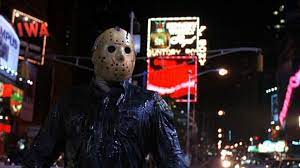 If you can’t tell from my sarcasm, I don’t like this movie. Still don’t like this movie. Taking Jason out of the environs of Crystal Lake might have seemed like a clever idea, but it didn’t work. The movie drags badly while the action is on the ocean. We spend far too much time on unlikeable characters doing stupid things. None of their motivations seem legitimate and border on absurd. They hint at some connection between Rennie and Jason that would explain why he pursued them, but it isn’t fleshed out at all. This results in a movie that seems to be a random series of Jason kills loosely held together by what passes for a plot.

There are a ton of kills in this movie, nineteen in all! Not one of them is noteworthy. Many are off screen and others generic throat slashing/stabbing. The most memorable kill in the flick is a dude’s head flying off a roof. That is okay, but nothing special. They double down on the gag by having it put in a police car to scare people. I guess Jason is all about the pranks now?

This is just a terrible movie. By far the worst Friday the 13th flick in the franchise and I’m including that CGI fest remake in this! If this movie had the best gore ever, I still think it would have been killed by the dull pacing of a script that had nothing going for it at all. I’d avoid this movie like the plague. I don’t recommend Jason Takes Manhattan.