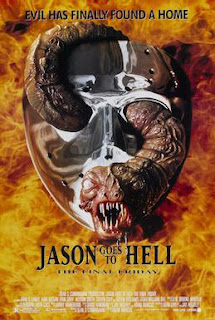 Today I’m going to take a look at a Friday the 13th movie that is unlike any other in the franchise. Mostly because we don’t get much Jason and instead get a back story that explains he is really an evil slug/worm that likes to take up host in bodies. Though he can only live in the body of a Vorhees for long, so he needs to be reborn in the uterus of his sister… wait Jason had a sister? You know what I’ll get to that in a minute.

The movie opens with a woman driving to an isolated cabin. She finds the lights out and has to go to a spooky shed to get a spare bulb. Then stumbles thru the dark cabin to finally get the light screwed in. Then immediately goes to take a shower and therefore gets naked. These are all things where Jason should show up, right? Well, he does, and she runs in the woods wearing only a towel. Okay movie I’m digging on you after the screw up that Friday VIII was. Then boom… spotlights illuminate our favorite zombified killer and dozens of cops/soldiers blaze away at him with automatic weapons! They eventually “kill” him with what I think is a mortar. This was all a setup you see.

Now Jason Vorhees is nothing more than a pile of parts. When the coroner starts to do a postmortem, he is possessed and eats Jason’s black heart. The spirit of Jason takes control and sends the doctor back to Crystal Lake so that he can be reborn in the uterus of his sister or perhaps her offspring. This is how for most of the movie Jason is a worm that crawls in and out of people taking them over so that they can continue his homicidal work. Eventually we the audience and the characters find out that only a Vorhees can kill him. So, the magic knife gets plunged into his heart and Jason goes to Hell! Which leads us to the coolest ending I’ve ever seen in a theater one that took a decade to pay off. You see it is Freddy Kruger’s gloved hand that grabs the mask and takes it down! 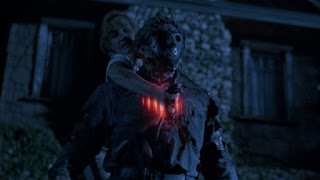 For this review I watched the unrated version that came with the new Blu-Ray set that was released a few years ago. I had never watched this version and was shocked at how great the gore was. Shouldn’t be that surprised since it was KNB that did the work, and those guys always delivered the goods. This is a gory movie filled with some twisted stuff and great kills. There is a neat gag with a straight razor that looks painful, a neck gets smashed in a door, a formerly possessed deputy melts after Jason exits the building, bones are smashed, faces crushed and deep fried. All around this is a good time. My favorite kill though is a “cowgirl” getting stabbed and split in half. Trust me if you watch the movie, you will understand whom I am talking about. I was a bit disappointed with the actual Jason makeup, but we don’t see much of it, so I suppose that is okay. The evil worm thing is a neat effect and looks good, so there is that. We also get a fun cameo from the Necronomicon and the dagger from Evil Dead II. Mostly this was because KNB also worked on that movie and not to connect the two universes. But as a horror nerd I was totally geeking out on this. The movie also has some self-aware moments with characters talking about smoking weed and having premarital sex after skinny dipping. Hell, they even have Kane Hodder out of costume and playing a security guard. So, there are many references tucked in the movie for fans of the genre to appreciate.

I’m torn on this movie. It has some great gore and funny moments that I enjoyed. But it isn’t a Friday the 13th flick or at least doesn’t feel like on. There isn’t much Jason, and what we get is him getting his ass kicked not once, but twice. Jason doesn’t get to kill anyone in this movie! Let that sink in for a minute. If they had called this the evil killer worm from upstate New York I would probably like it more. Though I suppose that is just me splitting hairs. Regardless I do really like Jason Goes to Hell, which is a sentence I never thought I’d say or write. Just make sure to watch the unrated version.

Posted by Gutmunchers Lives at 1:15 PM