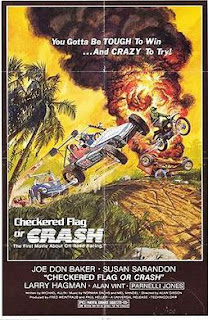 The drive-in theaters were filled with “car” movies for most of their existence. Though they really hit their stride in the seventies with flicks like Vanishing Point and Grand Theft Auto. I’ve watched just about all of them over the years so imagine how surprised I was to have found Checkered Flag or Crash. It stars Joe Don Baker, Larry Hagman, and Susan Sarandon as well as being shot in the Philippines. Car movie… check! Cast of actors I dig… check! Shot in one of my favorite locations for drive-in flicks… check! How have I never seen this before?

The story is very simple. Joe Don Baker is a driver who is nicknamed Walkaway because he is the only one that normally walks away from his many wrecks. He has been sponsored by a magazine to take part in a big rally race in the Philippines with the agreement that he takes a reporter along for the ride. What he doesn’t know is that it is a lady reporter played by Susan Sarandon. We also get a bunch of other characters including a pretty lady on a motorcycle, a French race car driver, a local driving a taxi, and a few more. I’m glossing over these because they don’t do much with them other than an occasional scene here and there. We don’t even find out what happens to any of them, though given the sheer number of crashes I’m thinking a lot of them died!

The race is being put on by Larry Hagman’s character. He is determined to finish the thing even after there is a flood and mudslide that forces him to choose a dangerous route where the racers will not only have to dodge each other but construction equipment as well. Why the rush? Well there is a toss away line about him owing “people” money that infers it may be the mob or some other organized criminal enterprise. Don’t worry though we never hear about it again. Heck they even hint that the promised prize money might not exist which is something else that is never resolved.

Checkered Flag or Crash has some serious issues. The plot is paper thin filled with, as I’ve mentioned above, far too many throwaway characters to pad the runtime. It would have been nice to see some of the subplots go somewhere, but that doesn’t happen at all. Even the main plot with Walkaway and the reporter doesn’t have a resolution. He basically is an ass to her leaving her stranded in the middle of nowhere at one point, though she still cares about him. I suppose making your male lead be completely without redeeming qualities might have been a bad choice. I didn’t like any of the characters and that is an issue.

Most of the better car movies have human characters and a story that is set in and around the road/race/chase. Here it is all about staging the car crashes and stunts. There are a lot of them, though the way they are shot makes it difficult to follow the action at times. So not only do we not have much story to keep our attention what they try and hang their hats on, the stunts and racing, is also poorly executed. This is further hampered by them mostly using voiceovers from the actors as the cars roll by to tell the story.

Checkered Flag or Crash isn’t a good movie. I’m happy to have watched it as I’m a nerd for this sort of thing, but there are so many better options for casual fans that I can’t recommend it. Check out one of the other movies I’ve mentioned already or perhaps the more mainstream Cannonball Run or Gone in Sixty Seconds. These are way more entertaining.