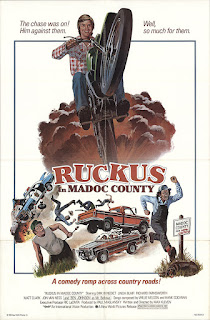 Ruckus stars Dirk Benedict as a Vietnam vet who we find out was captured twice and spent time in a Viet Cong prison camp, escaping both times. This is important because he doesn’t like being locked up. We see him wander into town and buy a raw hamburger from a stand before trying to leave. The local big shot, Bellows, wants to talk to him about his missing son. He recognizes the unit patch on his jacket and hopes beyond hope that he might know something. But Kyle, the vet, ignores him and tries to leave town.

The sheriff and Bellows are both sympathetic to Kyle, which is an odd change for movies like this where they normally would be the villains and are happy to leave him be. But there is a deputy and a few others that take a dislike to him, which is only made worse when they mess with him, and he kicks their butts! From that point forward they are not only cruel but a bit homicidal towards him. They go from zero to lets murder this guy in a heartbeat. Toss in Bellows’ daughter in law Jenny who is a bit sweet on Kyle and there is some jealousy added to the fire. This all leads to a big showdown that is at times silly chase flick and at other times very dark and violent.

I really enjoyed Ruckus. It is paced well just enough character development to make you sympathetic towards Kyle and to understand the predicament of not knowing for sure that Jenny and her father in law are dealing with. I liked these characters. And again, I was very surprised in the decision to make the sheriff and patriarch of the Bellows’ family kind people. That isn’t what the formula dictates. That said I’m not sure why the locals get so bloodthirsty so quickly and more importantly how they thought they could commit murder under the noses of men who would care and assumedly try to punish them. 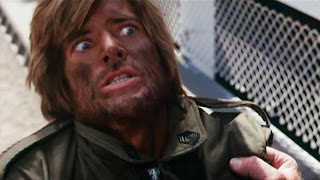 On a much lighter note, we get a lot of mayhem in the movie. Cop cars get stolen, there is a big dirt bike chase, another car chase, some boat chasing, and lots of crashes. Dynamite is tossed around in a manner that probably should have maimed folks, but they are okay. Roofs are torn off vintage (though not at the time) trucks and many cars explode. So, you can see why I tossed this in with my automotive mayhem marathon. There is even some romantic bonding while riding dirt bikes. That last one is for the ladies!

The cast is great and includes the already mentioned Dirk Benedict. Linda Blair plays Jenny and her father in law is played by the legendary Ben Johnson. Richard Farnsworth is the sheriff and Matt Clark is one of the bloodthirsty rednecks. You may not recognize that last name but if you watched drive-in flicks in the seventies, you will recognize him. This is a solid cast that is more than up to the challenge of bringing these characters to the screen.

Not a perfect movie but one that I think deserves a look. This one can be a challenge to locate but it is out there if you look hard enough. As of the writing of this review I couldn’t find it streaming on any of the major services but won’t be surprised if it shows up on YouTube at some point.

Posted by Gutmunchers Lives at 2:27 PM