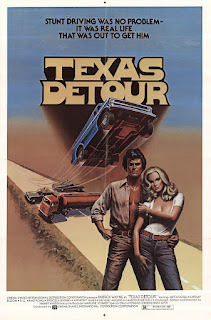 The opening credits roll over brothers Clay and Dale along with their sister Sugar as they travel along in a groovy seventies van with Dale playing his guitar and singing a song. As soon as the credits finish, they get into a car chase where eventually the van is forced off the road by some criminals who steal their money as well as their ride. This sends the three off on foot where they meet up with a local named Beau (played by Anthony James) who offers them a ride if they can help him get his car running. They do and after an unhelpful visit to the sheriff’s office they end up working at the ranch owned by Beau’s father.

After some working the ranch montages and a bar fight, we see Beau chase down Sugar and rape her. This is the seventies and Texas Detour is a “hicksploitation” flick so that is par for the course. This sets Clay up to chase down Beau and beat the hell out of him. But the sheriff stops him before he does too much damage, though Beau is pissed off. Since his family runs the town, the sheriff can’t do much about it. After Clay beds Beau’s sister Claudia (played by Priscilla Barnes) and Beau is killed by someone else in a barfight things get crazy. Everyone blames Clay for the murder, despite having an alibi provided by Claudia which leads to one final car chase as the they try to escape the county with the sheriff and father of Beau and Claudia in hot pursuit.

I love these movies and their odd screwed up seventies’ logic. The rich family can get away with anything because they own everything. But their influence ends at the county line so all you have to do is get there or in this case jump over a roadblock! This same basic plot was used repeatedly in these cheap but entertaining drive-in flicks. Here they don’t screw the formula up as the movie plays out something like this. Car chase 1, dirt bike race, bar fight with hicks, horse vs. dirt bike race, bad thing happens (rape), another dirt bike race, and final car chase. You mix in some musical numbers and the working on the ranch montage, and you have yourself a movie. Simple but effective as something interesting is always happening from the opening credits to the final frame. The cast is filled with familiar faces including Patrick Wayne as Clay, R.G. Armstrong as Sheriff Burt, Anthony James as Beau (did he ever play a good guy?), and Cameron Mitchell as the pissed off patriarch of the powerful family. Of course, I’ve already mentioned Priscilla Barnes of Threes Company fame in her first starring role. This is a solid “B” cast bolstered with a few Hollywood veterans to round things out. I miss the days when you could get solid working character actors to show up and put in a good day’s work regardless of what kind of movie they were making. I think that is what is missing in today’s low budget flicks.

This isn’t a classic or even a great movie if I’m being honest. Texas Detour knows the formula, adheres to it, and in the end provides us with a fun way to kill an hour and a half. Not everything needs to be art or reinvent storytelling/filmmaking. Some movies are just meant to be a good time. With that in mind I recommend folks track down a copy and check this one out.

Posted by Gutmunchers Lives at 4:26 PM