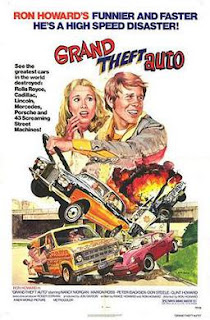 I haven’t covered nearly enough car movies for the site. The seventies were filled will all kinds of automotive mayhem, especially for the drive-in crowd. I thought I’d kick off my look at these movies with Grand Theft Auto. Produced by Roger Corman it was Ron Howard’s first directorial effort. Time to check it out.

Howard plays Sam a wholesome good guy who fell in love with a rich girl named Paula. They go to see her parents to tell them they are getting married, and they freak out. Her dad is running for governor and wants her to marry into the right family. They have already gotten her engaged to a rich boy named Collins Hedgeworth. They take away her keys and think that is that. But of course, this would be a very short movie if it were.

Paula sneaks out and takes the only other car available, her dad’s Rolls Royce. She and Sam head to Las Vegas to get hitched and her father freaks out. Not sure if he is more worried about her or the car! Since he is running for governor, he wants to keep this on the downlow so instead of calling the cops he sends private security after them. When that doesn’t work, he puts out a twenty-five-thousand-dollar reward on her safe return. This if further complicated when old Collins Hedgeworth takes off after them and his mother panics and offers a reward for his safe return. This is basically an excuse to have a bunch of oddballs involved in what is for all intents and purposes an hour-long chase on screen.

My favorite part of Grand Theft Auto is the will they or won’t they wreck the Rolls. The movie keeps teasing you with close calls. It isn’t until the end that you find out if the movie is going to trash the classic. I won’t spoil it for you here. I also wanted to mention that the movie uses a trick that many of these car flicks use. There is a radio DJ who is following the progress of the Rolls and acts as a narrator. This helps fill in the blanks and keeps the audience on track between the crazy wrecks and stunts. As we dig further into these flicks you will see this again.

I love this movie. The story is very simple and the characters likeable. There isn’t much character development but this is a car movie so who cares about that? We get plenty of crashes, stunts, funny characters, and great lines. This isn’t mean to be some new groundbreaking piece of art. I like the cast and it is filled with a ton of familiar faces. We get a couple of Corman regulars like Paul Bartel and Allan Arkush, as well as a lot of Howard’s friends and family. His dad Rance, brother Clint (a personal favorite of mine), and even his television mom Marion Ross appear! It was awesome to hear her swear and flip people off. Someone was certainly having fun. We even get an appearance from Paul Linke (Motel Hell) as snooty rich boy Collins Hedgeworth.

You can tell that there is a lot of talent in front of and behind the camera. Not only does Howard show his future directing chops buy keeping things exciting and the action moving but he is helped by his editor. Normally I don’t mention editors by name in my reviews but with Grand Theft Auto I thought you might recognize the name Joe Dante. Corman had a hell of a group working with him in the seventies.

Now that I’ve talked about the cast, I have to tell you that the real stars of the movie are the cars. In addition to the Rolls Royce, we also get a vintage Dodge Charger, a nice little Volkswagen Beetle, and a sweet looking Porsche. These are just a few of the cars that we see on screen. One of my favorite things about these car flicks are looking at the classics that you don’t see on the road anymore. I’m an older guy so as a kid I remember the muscle cars driving around town all the time. It makes me nostalgic.

I’ve mentioned the stunts so let’s take a deeper look at them. There are multiple jumps, burn outs, and other such staples of car chases. Some of the highlights are a smashed chicken coop, dynamite being tossed at cars, a bridge that blows up, and of course they drive a car thru a house. My favorite though has always been the Rolls playing chicken with a helicopter. I noticed that there are a couple spots where they did stuff off screen. Once I think it is for a comedic reveal and the other because they couldn’t actually wreck that particular vehicle. The story wraps up with a demolition derby that sadly takes out many of the stars, the cars, of the movie.

I highly recommend you guys check out Grand Theft Auto. This has been and continues to be one of my favorite drive-in movies. Sadly, I never got to see it there, but it was in heavy rotation on the various late-night movie shows that I did watch.