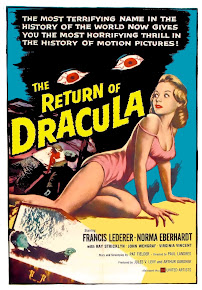 I’m back with another review from one of my favorite decades for horror, the nineteen fifties. This time around I checked out a vampire movie feature everyone’s favorite, Count Dracula. So let’s dive in and see what we have.

The movie starts off with a voiceover that tells us Count Dracula was read and that he was a vampire. He spread his evil and was never completely stopped. It is at this point that we see some men arrive at a cemetery and enter a tomb. Armed with stakes and crosses the open a coffin only to find it empty. Seems that they have missed out on their chance to finally stop Dracula. He has escaped, but to where?

Next up we meet a painter that is finally escaping Eastern Europe for freedom in the United States. He says his goodbyes to family and boards a train. Guess who is his compartment companion? Yep Dracula, who proceeds to kill him and then take his place. So now the Count has arrived in America to start a new life or is suppose un life. He tries his best to fit in with the family while moving his coffin to a nearby cave and targeting a blind girl as his first victim/acolyte. All is well until the men from earlier arrive. It seems they have tracked him to his new home.

This is a much better movie than I anticipated. The story is interesting and combines the traditional vampire narrative with some goofy fifties monster movie goodness. Dracula creeps around being charming in spots while at other times manipulating the murder of others. He kills the blind girl Jenny only to call her back as a vampire so she can do away with one of the men pursuing him. The pacing of the movie is solid moving from one creepy scene to another without wasting any time on unnecessary padding. This makes for a quick and engaging movie that I have to say was a lot of fun to watch. 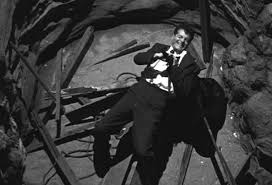 Return of Dracula is shot beautifully in black and white taking advantage of some interesting locations like the cave to bring a lot of atmosphere to the flick. The attack on Jenny is shot in such a spooky way it shows the effort put into the lighting and camerawork. The filmmakers use some neat effects with smoke and basic in camera effects to make the vampires materialize out of nowhere. There is also a neat gag when they finally stake Jenny where the black and white film suddenly has a splash of red with the blood. I even dug the familiar but well executed post death of Dracula where we see him age and turn into a skeleton before our eyes. Again, nothing new but well done.

This is another movie from the fifties that I somehow had missed. I’ve owned this DVD for many years but somehow Return of Dracula has fallen thru the cracks. Now that I’ve watched it I feel silly having waited until now to check it out. I highly recommend that you avoid my mistake and track yourself down a copy. You won’t be disappointed.

Posted by Gutmunchers Lives at 8:05 PM