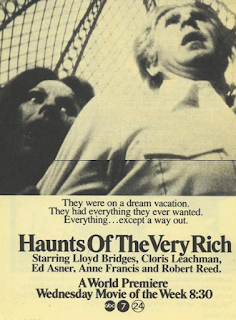 This is another made for television movie that I’ve never seen before. It is a remake of a movie from the thirties called Outward bound that I was also unaware of. Filled with a cast of familiar faces I was excited to check it out.

The movie opens on an airplane as we see passengers milling about talking to each other. This is one of those seventies’ airplanes with a lounge, drinking, and smoking so you get the idea. They are all making small talk until an annoyed businessman named Hunsicker wakes up and demands to know where they are headed. It is then that we find out none of them are sure how they got on the plane, but they do know they are all headed to a resort called Eden’s Portal. Okay movie at least try and keep some sort of mystery to the goings on! They land and are greeted by Seacrist, who sets them up in rooms and goes about making them comfortable.

The first night there a huge storm blows in and knocks out the power and phones. Isolated they start to realize that something is terribly wrong. Each of them has had a brush with death recently and after the staff disappears and one of them tries to commit suicide it becomes apparent that they are all dead. Or at least that is what some of them think. But then a plane shows up telling them that help will be on the way. But it is a false hope because it was piloted by a singer who had recently died. What happens to them? Is this Heaven or is it Hell? Perhaps they are in purgatory? Here is where I normally tell you all will be revealed before the end credits, but Haunts of the Very Rich isn’t that kind of movie. 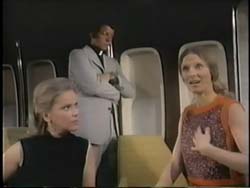 Since I’m a positive guy I’ll start off with what I liked about the movie. First of all the cast is very good. You have Ed Asner as the cranky businessman Hunsicker who just needs to get to Texas to finalize a deal. Robert Reed of Brady Bunch fame is the Reverend John Fellows, who is dealing with a crisis of faith. There are two lonely folks, Dave and Ellen, who find love with each other in these terrible circumstances. They are played by the legendary Lloyd Bridges and Cloris Leachman. They have chemistry and make it seem feasible and likely that they could have fallen for each other so quickly. Donna Mills has a very small part but makes most of it. We also get Moses Gunn as the hotel manager Seacrist. He is criminally underrated and is always great when he shows up in a movie. Finally, we have Anne Francis appear as the housewife Annette who has the best character arc when she realizes how and why she died and ended up at Eden’s Portal.

The cast makes Haunts of the Very Rich possibly worth a watch for fans of seventies television despite the predictable and at times plodding pace of the story. For a movie like this to work you need to have some mystery as to what the heck is going on. Sure, they try and tempt you with hope, but the fact that it is false hope for the characters is telegraphed badly and doesn’t work. For example, the singer showing up to fool the audience into thinking that it must all be okay. They have already made a point in establishing that he had died by having characters talking about it, so you know he is going to show up. As soon as the plane landed, I was like… “there he is”. When Seacrist shows back up in yet another airplane after going for help I didn’t think for one second that they were saved. The movie needed to keep me guessing to hold my interest and it fails.

They double down on the disappointment with a vague ending that did nothing for me. They should have at least established that the characters were in some sort of purgatory. Sure that isn’t a happy ending but at least there is some sort of resolution. How do I know it is purgatory? The name of the resort is Eden’s Portal. You know just outside their eternal reward and all that. Instead, they end it on a freeze frame of Dave and Ellen trying to escape. I wish I could recommend this one but some of these old made for T.V. movies are forgotten and obscure for a reason.

Posted by Gutmunchers Lives at 2:52 PM

Email ThisBlogThis!Share to TwitterShare to FacebookShare to Pinterest
Labels: '70s, Genre - Horror, Genre - Made for T.V.