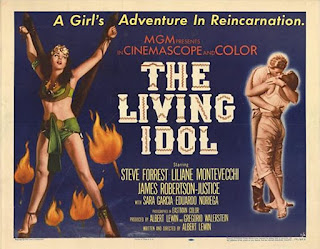 The movie opens with some men climbing up a set of narrow stairs in an Incan pyramid. When they reach the top they discover a statue of a jaguar, which freaks Juanita out. She is a lovely young lady that was with the men. One of the men, Terry, races after her. Turns out that and she are sweet on each other. When Juanita’s father dies in an accident at the dig the other man, Doctor Stoner, adopts here. Following so far?

Months later Juanita is living with Stoner in Mexico City where he is working on his theories regarding superstition. This is important because he thinks that Juanita is cursed or something like that. She has never been right since being scared by the jaguar statue. When Terry returns from Korea, he is a photographer, he picks back up with her. But soon it becomes obvious that things aren’t right. There is a big fight between the jaguar god, in the form of an animal that Stoner releases from the zoo and Terry. Some people die and the rest live happily ever after.

I really wanted to like this one. Sadly, the story spends far too much time on the romance between Juanita and Terry. There are several dance numbers, some romance, and much drama. That shouldn’t be a big surprise since this was co-produced by a large Hollywood studio, Allied Artists and that was par for the course. Sure, there is an occasional “what the Hell” moment to let you know there is something supernatural afoot, but these are spread out too much for the movie to create any momentum. Forty minutes in and we have yet to see much of anything in the way of old school horror. That brings me to the other big issue. At forty minutes in we still have another hour to go! This movie is far too long for what it is, and they could have taken a cue from the independent horror productions of the fifties and trimmed it down.

The cast is decent with the most familiar face being Steve Forrest, who I recognized from his television work in the seventies. The Living Idol was co-directed by Rene Cardona, who I know from several Santo movies. I also have to say that the fact this was shot in color, a novelty reserved for bigger budgeted movies in the fifties, as well as it being shot on location was nice. The movie is beautiful and takes advantage of the exotic locations available to the filmmakers. We also get some nifty carnival sequences that are highlights of the first half. I just wished they had a tighter grip and focus on the story they were trying to tell.

I noticed that many folks compare this to Cat People. While the subject is similar and they both share a sequence where the lead actress is traumatized by a trip to the zoo, that is a far superior movie. There is some mystery and tension to that movie that we just don’t get with The Living Idol. Again, I wanted to like this one but simply can’t recommend it.

Posted by Gutmunchers Lives at 11:16 PM