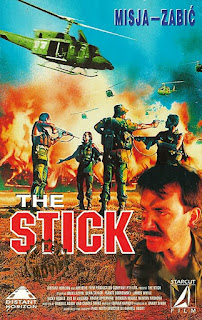 In my never ending search for movies that I may have missed I stumble across some odd ones. The Stick is a weird sort of mashup between Platoon and your traditional ghost story/revenge tale. Complete with the pointlessness and horrors of war as well as your supernatural comeuppance for bad acts.

The movie opens with a small detachment of men being ambushed while on patrol. I believe that they are across the border in some sort of police action with the neighboring country. This is a South African made movie and I think they had sort of an unofficial conflict with rebels that kept sneaking across the border for safety. Not entirely sure and wasn’t wanting to get a history lesson for this movie. I apologize in advance if I get any of the details wrong. After seeing them all killed by some mysterious men with guns, we get to see a meeting where the officers are yelling at the troops. This leads to another series of patrols with platoons split up into sticks, groups of seven to eight men. It is one of these sticks that we follow.

The rest of the movie are these men crossing the border, arguing with each other, gunning down a village, and getting killed themselves by what appears to be the ghost of the witchdoctor and those mysterious warriors. Along the way we see one of them, O’Grady, lose control and murder a child that they had let go. There is also a spooky ritual as it seems the witchdoctor has blessed some soldiers that may or may not be the enemy.

While The Stick does have a lot of supernatural elements including people coming back from the dead, ghostly visions, and attacks from nowhere this movie plays more like a futility of war story than it does horror. Though I suppose that is itself a sort of horror. The first half to two thirds is them on patrol walking across the wilderness in search of the enemy. This establishes the characters and sort of lets you know who each of them is. There is the violent one, the stoner, the gung ho soldier, the reluctant guide, the ineffective officer, and the man who is sort of our eyes. A participant but also the commentor. His voice is used in a voiceover that attempts to connect the parts of the story into a cohesive narrative. It sort of works, though at times gets a bit intrusive. 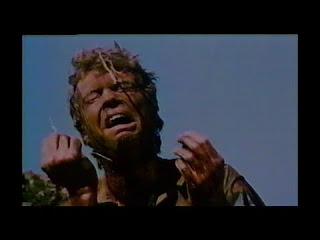 The pacing is also quite bad with lots of pausing to take in what is admittedly some beautiful scenery as well as lots of talking. When we do get to the spooky stuff it does pick up a bit, but even then it is them walking back towards base in an attempt to escape it. This leads to a lot of taking, arguing, and not enough revenge and ghost stuff. Hell, some of the deaths seem random including stepping on a landmine! Still there are moments that worked so I don’t want to dismiss The Stick completely. I was just disappointed in what I got. Based on what I read before and after watching this was sold as a horror movie and is not that at all.

I’ve already mentioned that they do a good job capturing the setting on camera. This is at times a pretty movie and considering I noticed that on the beat up VHS copy I watched for this review that is saying something. Also being as low budget as they were you get a lot of handheld camera work which puts you right on the ground for the chaotic combat scenes. That can be annoying but here helps to tell the story decently enough. I felt like I was right there in the middle of things with the characters and that helped keep my attention, offsetting the difficulty of keeping track of the action.

I don’t want to get into much more detail as I might spoil things. My concerns are that you manage expectations before sitting down to watch this movie. If you are wanting something scary that will creep you out then this isn’t the right choice. I also wonder if the story translates as well to someone who doesn’t have a good grasp on the setting. While not a great movie I think that to the right audience in the correct state of mind it has a story worth listening too. I’m just not sure I was either of those. I can’t recommend it.

Posted by Gutmunchers Lives at 4:31 PM