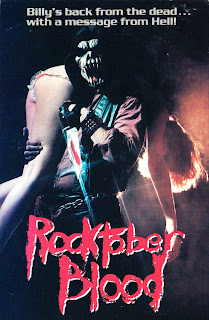 Just when I think I’ve run out of slasher movies from the eighties I stumble over another one. Rocktober Blood is another example of that. The movie kicks off with a singer/songwriter named Billy laying down his newest track. It is quickly apparent that he is a jerk as he treats everyone like shit. That includes a beautiful young singer named Lynn. After leaving for a bit Billy comes back and murders both engineers that were working with him in rather gruesome ways before chasing Lynn around.

Then the movie jumps forward two years. Thru some exposition we find out that Lynn testified at his trial and that he was sentenced to death. He is already dead and buried since in this world I guess that can happen in a couple of years. Though he insisted he was innocent during the entire trial Lynn saw him. Or did she? Now Lynn is the lead singer of Billy’s band and is about to release a record of his songs. But it looks like that isn’t sitting well with his ghost since someone who looks just like him is killing folks and taunting Lynn trying to make her crazy. Is this Billy returned from the grave? Well… can I spoil a movie that is approaching forty years old? Would that even be considered a spoiler?

Before I go any further, I will warn you that I’m going to give away the big plot twist. If you don’t want that to happen, then I’d suggest skipping to the last paragraph. The movie’s pacing is incredibly uneven. I was excited when we got some stellar kills in the first fifteen minutes. There is some stalking and some nudity as well. I thought that I had found one of those hidden gems that was going to follow the formula and be a good time. The acting from the killer is over the top and cheesy which is mixed in with some decent rock and roll music. But once the movie jumps ahead, we get a lot of inane dialogue about what happened. Sure, there are some sweet eighties style up close aerobics, but that can only take you so far. 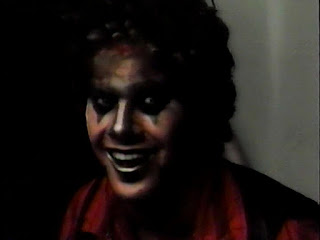 Things do pick up again as we find out Billy had a twin brother John who did all the killing but that somehow no one ever knew about. He framed his more famous sibling and sat back to watch him get killed. But now he thinks that Lynn is screwing up the music and must also die. Though not right away apparently as he picks off a bunch of her friends first. I mean he could kill her anytime because he keeps showing up and taunting her with “rainbow eyes” which is the song that was written for her.

The kills are solid. There is a decent throat slash, and another person is pinned to a wall with some metal spikes. The real highlights are when the killer slaughters some backup dancers by gutting them and lopping off one of their heads. We get a couple great gags, but they all are either in the opening or the big finale. What happens in between is very slow and boring. I also liked the killer in his skull mask, but once the mask is off he looks like a bootleg Sean Astin which isn’t scary at all.

In conclusion Rocktober Blood is a weird low budget slasher flick that has a few fun kills but that is about it. I can’t imagine wasting another ninety minutes on this one so I can’t recommend spending money on it. Maybe if you find it streaming or you can rent it then give it a shot.

Posted by Gutmunchers Lives at 2:49 PM